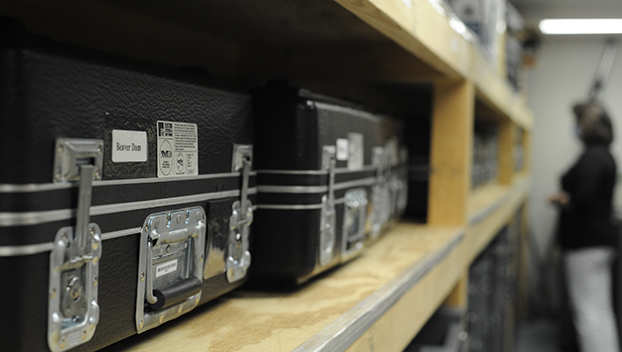 CERTIFIED: Beaufort County Board of Elections Director Kellie Harris Hopkins checks tabulators for each of Beaufort County’s 21 precincts, which are kept in a locked storeroom until needed during election. (Vail Stewart Rumley/Daily News)

Beaufort County’s election was certified Friday by its Board of Elections, an election BOE Director Kellie Harris Hopkins said was unlike any she had seen before.

“We’ve been taking a lot of precautions coming into this election that we haven’t before, and security was at the core of it,” Hopkins said. “We did all sorts of tabletop exercises to prepare us for any issues that could come up. We actually had Homeland Security come up and do a security check on our building.”

None of Beaufort County’s local races changed in the days between the unofficial and official counts, when absentee ballots postmarked on or before Nov. 3 and accepted until Thursday were added to the vote tallies, and with the investigation, then approval or dismissal, of provisional ballots cast. Of the 131 provisional ballots received and looked into by the BOE, 63 were counted. Most of the ones accepted were cast by voters who had not voted in a long time and had been classified as inactive on the voter rolls.

The extra preparation and precautions led to an election the federal Cybersecurity and Infrastructure Security Agency this week called “the most secure in American history.” And local preparation, in Beaufort County and surrounding counties, meant that everyone was on high alert.

“It’s been a good election, but it’s been interesting. We’ve had some stuff happen that I haven’t had to do before,” Hopkins said.

There were a few “firsts” for the BOE, according to Hopkins.

In Belhaven, a young man walked into the precinct during one-stop voting and did same-day registration, then voted. However, the young man was not a U.S. citizen.

“He went home and told someone what he had done, and they told him he could not do that. He called and self-reported it. Because absentee ballots are retrievable, we were able to go in and pull that ballot,” Hopkins said.

Pitt and Beaufort counties also shared a voter this year: “We had a double voter with Pitt County. The voter was registered in Pitt County and had requested a mail ballot, and it appears they voted that mail ballot, then came over here and registered same-day and voted one-stop,” Hopkins said.

“(The vote) counted here, because that was the latest address that the voter stated they were living at was here, so Pitt County (on Friday) pulled her mail ballot,” Hopkins said. “It has been referred to the investigative team at the state Board of Elections. … I know the state has attempted to contact her, but I have not heard any details.”

The state Board of Elections caught another case of a request and vote of a mail ballot, this one in Martin County, followed by a same-day registration and one-stop vote in Beaufort County.

“We believe that that absentee ballot in Martin County was completed by somebody else in Martin County. The signatures did not match — they weren’t even close,” Hopkins said. “The state is constantly running our data, back and forth, trying to find that stuff. Sometimes we find it; sometimes they find it, but we’re constantly auditing. There’s a lot more to it than people realize.”

In all, Beaufort County’s error rate was 3 in this election — each caused by a voter error. Three people filling out provisional ballots which are supposed to be placed in an envelope and returned to poll workers, instead fed their ballots through the precincts’ tabulators. Two of those provisional ballots were not counted because the voters did not fulfill the requirements to vote; the third, however, did, and that vote was accepted and did not count as an error.

The third tabulating error came from a registered voter walking into a precinct, receiving a ballot but not voting.

“We have one ballot that walked out of precinct. Either they decided not to vote and threw it away, or they took it with them. The tabulator number was one less than the ballot number,” Hopkins said, adding if an error is going to be made, having less votes than voters is the preferred one. “What scares me more is if you had more ballots than names, but every night, we are constantly making sure our numbers are adding up. I don’t think the public realizes that we audit that deeply and that often. … But three out of 26,397 (total voters)? I think that’s pretty good.”