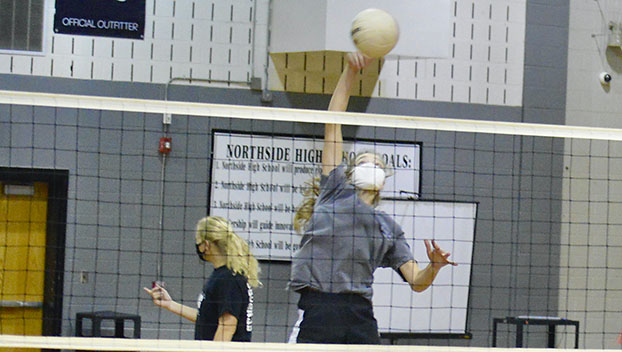 The public school volleyball season is just getting started right about the time it should be ending and there’s a new COVID-19 related twist — the players have to wear masks during matches.
The North Carolina High School Athletic Association tacked on the new requirement late last week requiring all athletes, coaches and support staff involved with indoor skill development sessions to wear a mask at all times. Monday was the first time teams wore them during practice and Tuesday’s opening volleyball matches mark the mask’s debut during competition.
“It’s very weird and different, but I can handle it,” Northside volleyball coach Michelle Leathers said. “I feel like if I moan and complain and show negative feelings, my team will do the same, so I don’t. I tell my players that life is full of change and it’s just another obstacle to overcome. We’re built for stuff like this at Northside.”
Monday’s hour long varsity practice was a final tune-up session for Tuesday’s opening match at Beaufort County rival Southside. Ten of the 11 players wore their masks throughout with occasional drops to catch a quick breath. The other player had a medical exemption.
“It was itchy and made it hard to breathe sometimes, but we’ll get used to it,” senior co-captain Katie Godley said. “I think we sweat more with them on, but we’ll do whatever it takes to play.”
Leathers’ Panthers are shooting for their fourth straight trip to the state playoffs after losing to eventual 1A state champion Falls Lake Academy in the second round last year after first round losses in 2017 and ’18. The 5th year head coach has four seniors who have been part of the post-season run and they are planning on making a return trip, even with masks on.
“Wearing them is different and very uncomfortable, but our mindset is that we have to overcome it to get where we want to go, which is back to the state tournament,” senior co-captain Kathleen Slade said. “A lot of us have played together since middle school and this is our last run. We were very worried that we were not going to have a season at all, so we are fortunate in that regard.”
Taylor Chase and Rylie Norman join Godley and Slade in the senior class. Leathers is counting on them to set the tone.
“We have solid leadership within that group, and we have solid players up and down the roster,” she said. “We have been out here working in some form since July and are ready to start our season. Coach (Athletic Director Jared) Adams put a great practice and workout plan in place so we could keep going. Masks, no masks, or whatever, we will continue to follow the state guidelines on COVID-19 the best we can.”
The Panthers will play 14 matches instead of the usual 23 or 24. They will face Coastal Plains 1A conference foes Jones Sr., Pamlico County, Riverside, South Creek, Tarboro and Southside home and away with non-conference matches at Bear Grass Charter and Washington High School.

Grayson Warren’s connection to golf started when she hit a plastic ball over the roof of her grandparents’ two-story house.... read more