Future of school security in limbo 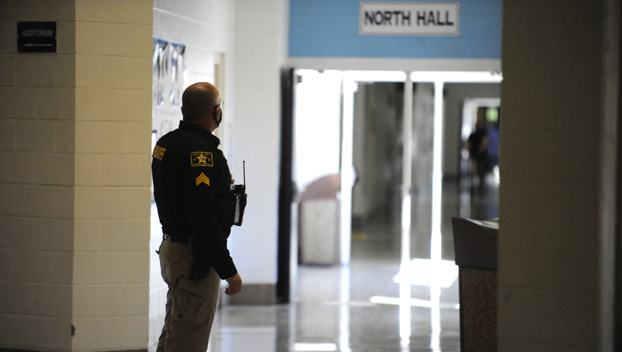 ON DUTY: A school resource officer (SRO) at Washington High School monitors traffic in the hallway on Thursday morning. SROs are Sheriff’s deputies tasked with maintaining safe and secure environments at schools throughout the district. (Brandon Tester / Daily News)

Beaufort County Schools’ administrators are pondering their options in the wake of Sheriff Ernie Coleman’s announcement last Friday that he plans to terminate the memorandum between the Sheriff’s Office and the district regarding the schools’ resource officer program.

In a letter sent to Superintendent Matthew Cheeseman last Friday Coleman said he planned to terminate the memorandum within 90 days. Coleman indicated that he personally didn’t want to end the agreement, which was expanded in July 2018 and is set to expire in June 2021, and he pointed to funding decisions by the Beaufort County Board of Commissioners in his explanation of why it had to happen.

“The reality of the situation is that this decision is over funding, or more accurately, a defunding of deputy sheriff positions because of personal feelings and politics above personal safety,” the letter reads in part.

Coleman’s claims stemmed from the county’s budget process for the fiscal year 2020-21. In the budget, 102 positions were allocated to the Sheriff’s Office — a decrease of five from the previous fiscal year. County Manager Brian Alligood last month explained that the Sheriff’s Office made a commitment last year to bring back a flat budget to the commissioners, and in order to accomplish that they had to leave those five positions unfilled and cut some capital spending as well.

Alligood also said that the commissioners took revenue shortfalls caused by COVID-19 into consideration when crafting the budget. He said all county departments had to tighten their budgets with that in mind, and all of them were put under a partial hiring freeze.

Prior to October’s board meeting, Coleman issued a press release in which he accused the commissioners of “defunding” those five positions, saying that the hiring freeze would cause “a shortage of deputies on the road taking emergency calls for the safety of the people.” In his letter to Cheeseman, Coleman referenced several of his department’s statutorily mandated tasks, including maintaining security in the county’s courtrooms, running the county jail and transporting inmates to and from prison.

“The defunding of these positions has forced me to choose between completing tasks that I have a statutory mandate to complete or keep the schools staffed with deputies,” Coleman wrote. “Once again, I did not want to even consider removing SROs from schools, but I am statutorily obligated to complete tasks that I do not have the personnel to complete. I have used SROs for transports while schools have been closed due to COVID-19 and would have to continue using SROs for transport while violating the MOU agreement.”

Cheeseman told the school board Tuesday night that he met with Coleman earlier in the day to talk about the circumstances of the memorandum termination.

“He essentially wanted me to share with you a direct message,” Cheeseman said, “that Beaufort County Schools should plan to go in a different direction moving beyond Feb. 1.”

Coleman repeated that point when Cheeseman asked if the there was a possibility of salvaging the memorandum, should the commissioners decide to fund the Sheriff’s Office’s frozen positions. A voicemail sent to Coleman’s office seeking more information about his decision hadn’t been returned as of Thursday.

Several school board members expressed their frustration with Coleman’s decision. All of them nodded in agreement as board member Terry Williams praised the district’s resource officers.

“So I hope they(resource officers) hear this board say, this is no doing of ours,” Williams said. “This is something that probably started between the commissioners and the office of the sheriff. And it’s unfortunate, but we had nothing to do with it.”

“It’s a shame that the security of our children is a casualty of this,” board member Butch Oliver added.

Cheeseman said he’s contacted Beaufort County Community College President David Loope to gather information about how the college handles security. BCCC has its own professional police department with state-certified officers. Cheeseman has also sent out surveys to 29 other school systems in eastern N.C. to find out how they handle security at their schools —whether it’s through a public department or a private security force. He’ll evaluate those options and report his findings to the school board at their next meeting.