Southside’s gentle giant-there when you need him 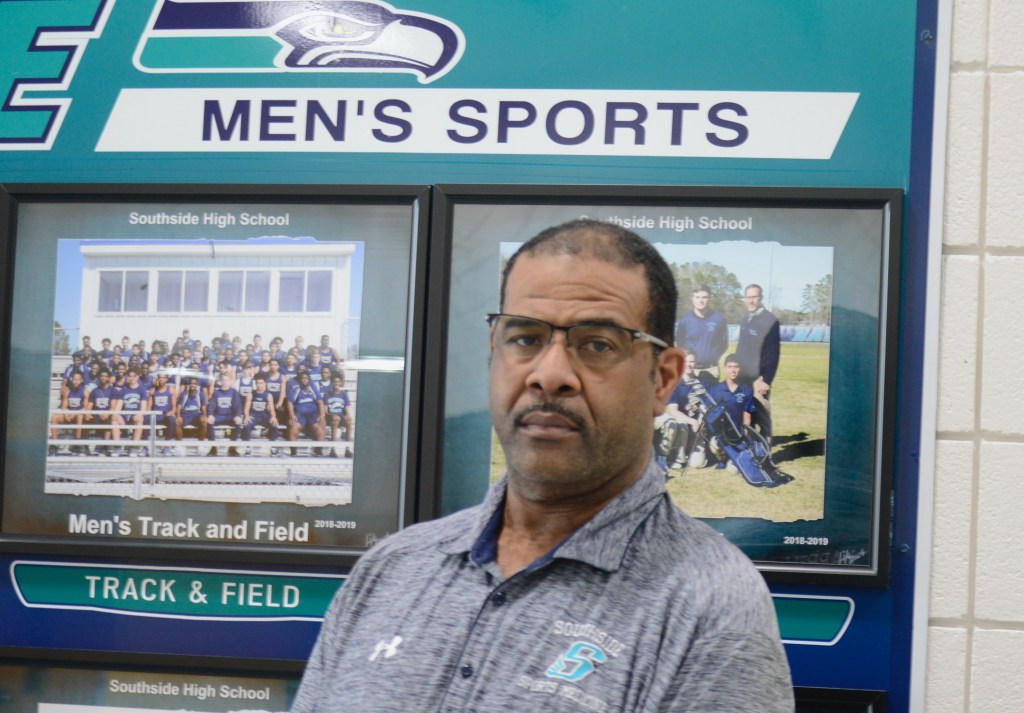 DEPENDABLE: Otis Harrell has seen almost every Seahawks home sporting event since the school opened in 2000.

If Otis Harrell was an Avenger, he would be Ironman, but they’d have to build a bigger costume.

The 6’7 Harrell has served as Southside’s sports medicine/first responder at home sporting events since the school opened in 2000. That’s 20 years of JV and varsity football, volleyball, soccer, girls and boys basketball, wrestling, baseball, softball, tennis and track events and he’s seen almost every one of them.

That adds up to well over 2,500 games, but Harrell’s been too busy wrapping ankles, treating injuries and even coaching to keep track.

The 49-year old Chocowinity native started taking care of athletes while he was in high school. His mother wouldn’t let him play sports after he broke his foot in a junior high football game, so he stayed as close to the action as possible until his senior year.

“I was 6’3 then and the basketball coach and several friends kept after me to try out,” Harrell said. “I was pretty good in pick-up games, so I got my dad to sign my physical before my mom knew about it. I had a lot of fun and ended up being the most valuable player in the Tobacco Belt Conference and the Washington Daily News county player of the year.”

Despite his success and a four inch growth spurt, Harrell decided he would rather pursue his long time goal in college. He wanted to become a chef. Fate intervened, so it was on to plan B.

“I was ready to go to Johnson and Wales Culinary School in Charleston, S.C., but Hurricane Hugo tore it up,” Harrell said. “I had always been interested in helping other people, so I decided to go to Beaufort County Community College, then Lenoir CC to get my Firefighting/EMT certifications.”

He worked nights at Beaufort County Hospital as a housekeeper while in school, then was hired an emergency room first responder, where after 32 years of service, he still works part-time. Harrell also spent 25 years with the City of Washington Fire Department, all the while serving as Chocowinity High’s first responder/EMT under his former teacher, Tom Bartick.

He moved to Southside with Bartick when the school opened in 2000 and has been a constant on the sidelines from day one.

“I don’t know what we would do without him,” Seahawks athletic director Andrea Quinerly said. “All the kids love him, and he is a constant in their lives. He has high principles and is a great role model for them. Everybody at school-students, faculty and staff feels safer with him around.”

The kids mean more than the games according to Harrell. They also see him in the hallways and the classroom as he teaches a Public Safety/Firefighting course that is open to any student in Beaufort county. He also travels with the football, basketball, baseball and softball teams, which causes him to miss a home game or two every year.

“The chance to make a difference in kids’ lives is the best part for me,” Harrell said. “I’ve had several over the years who were headed the wrong way and taking my class helped them graduate and go on to college. Every coach I know has bought food for their players on the road when they forget their money, given them a ride home after practice, help them buy shoes. That’s just what we do. You help them through tough times, then they come back and leave a note on your door that says, “Thanks for keeping me straight.” That’s better than any state championship.”