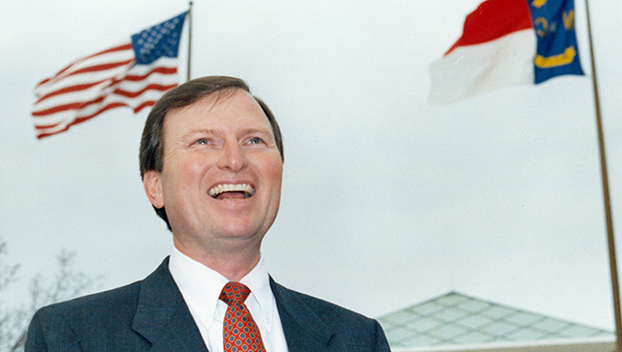 Durwood Swindell Laughinghouse, 72, of Raleigh, died peacefully November 19, 2020 from complications of Alzheimer’s Disease. Durwood loved life and lived it full speed. He loved to talk and joke and made friends wherever he went. He loved his family and friends and adored his grandchildren. Growing up on a large family farm in eastern North Carolina led him to love and respect the land and nature. He was passionate about lobbying, land, NC agriculture and farming, trains and Norfolk Southern Railroad, education, hunting and wildlife, hiking, old Westerns, and NC State sports.

Durwood was born in Pantego, NC on August 17, 1948 to Margarette and Fernie Laughinghouse, who predeceased him. On June 17, 1973, he married Connie McPherson Laughinghouse of Graham, NC who survives him. He is also survived by two daughters, Dr. Emily Laughinghouse Brazik (husband Dr. David Brazik) of Castle Hayne, NC and Laura Laughinghouse Hrdina (husband Major Jason Hrdina, US Army) of Chapel Hill, NC; and three beloved grandchildren, Grayson and Quinn Brazik and Seneca Hrdina. Durwood has one sister, Dianne Bowen (husband Neil Bowen and daughter, Kathryn) of Pantego, NC who survives him.

Durwood was a graduate of The Asheville School, NC State University and Wake Forest School of Law. Durwood became an attorney for the Department of Agriculture in 1974 under the leadership of Commissioner Jim Graham. Following several years back at his family’s farming operation, Durwood returned to private practice in Raleigh. He became a Resident Vice President for Norfolk Southern Corp in 1994 and retired after 24 years of dedicated service. He was very proud to be awarded the Order of the Long Leaf Pine for his service to the state of NC at his retirement in 2018.

Durwood belonged to numerous organizations and clubs. He served on the Board of Trustees for Meredith College and The Asheville School. He was proud to have served as a NC Wildlife Commissioner. Rotary Club of the Capital City, NC Independent Schools Athletic Assoc., Stag Club, Wake County Wildlife Club (hunter education instructor), Raleigh Good Ole Boys Club and his three hunting clubs were all important to him.

Durwood was a member of Pantego Christian Church and attended The Church of the Good Shepherd Episcopal in Raleigh. A family graveside service and burial was held at Bethel United Methodist Church cemetery in Graham, NC on Wednesday, November 25, 2020.

The family extends special thanks to Jenny Crump and her aides for their loving care to Durwood and especially to his friend and physician, Dr. James Parsons, for shepherding him through his final hours.

Online condolences may be made at www.richandthompson.com.