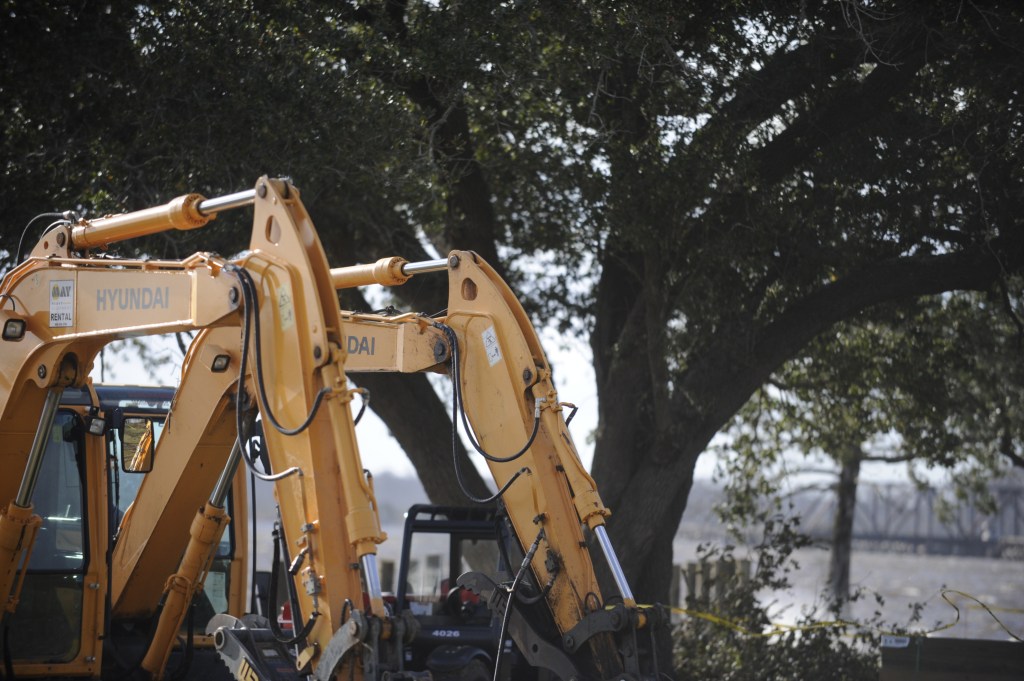 On Facebook, Mayor Donald Sadler said the trees near the Havens Gardens pier will be protected while new bulkhead is constructed. (Brandon Tester / Daily News)

Washington City Council member Betsy Kane recently took to Facebook to raise concerns about the Havens Gardens Park bulkhead replacement project’s impact on nearby trees, as well as the height of the new bulkhead pilings— which Kane says obstruct the view of the Pamlico River.

In a post last Tuesday, Kane introduced those two topics as “serious concerns” she’d heard from local residents. In that post, which included several photos of the work site, Kane claimed the work on the bulkhead was being done without protections in place for several live oak and laurel oak trees that stand near the waterline. Kane said the trees’ roots needed to be delineated and fenced off in order to prevent them from being damaged by construction equipment, noting that those machines had already created ruts in the ground near the trees. She also noted that the new bulkhead rose approximately six feet above the water, which she said would “obstruct the previously unobstructed, spectacular view across the Pamlico,” and would potentially interfere with public access to the water.

After Kane followed up on Saturday with another Facebook post, in which she claimed the situation was “now even worse than it was on Tuesday,” Mayor Donald Sadler indirectly responded to several of Kane’s claims on his public Facebook page. Sadler said he visited the Havens Gardens work site with City Manager Jonathan Russell on Saturday. Sadler said Facebook and his email account had been “buzzing” with concerns about the trees and the view of the river.

“The ground IS messy, as one would expect with heavy equipment rolling on saturated soil,” Sadler wrote. “That will be addressed on Monday.

“Next, the trees! Neither you nor the council wishes to see those beautiful trees harmed,” Sadler continued. “They’ve withstood everything more than a century of hurricanes and tree climbers have thrown at them, and they WILL be protected through this project. To that end, an arborist is consulting with us on the trimming and care of the trees throughout this beautification project.”

Sadler’s response to the concerns about Havens Gardens didn’t include the details Kane was looking for.

“… Mature trees can’t handle this type of damage, especially where the soil is saturated,” she added. “(Sadler’s response) did not acknowledge that this is really dangerous for the health of these trees.”

Kane has the support of ReLeaf Washington, a group that advocates for the protection of local trees. ReLeaf sent a resolution to the city calling for the protection of the Havens Gardens Trees, according to Kane. She said she’d work with any fellow city council member that wants to support her cause.

“The public is extremely concerned about this,” Kane said. “I’ve never had anything that got this much attention. And the comments on the Facebook posts speak for themselves.”