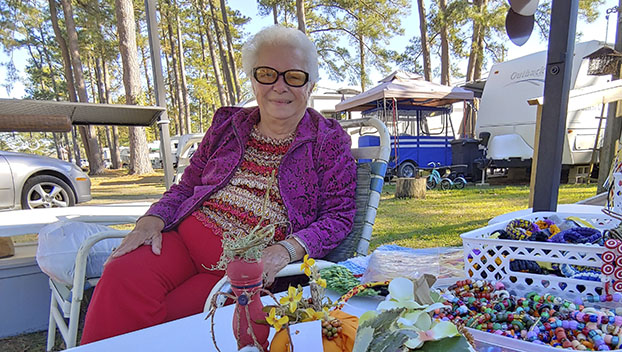 Autumn weather has arrived and, with it, a new supply of Thanksgiving and Christmas-themed treasures for gift-givers who love Ms. Eloise, her spunky store, and the loving heart that keeps her going strong on behalf of The Blind Center in Washington. (Karen Thiel)

CHOCOWINITY — Eloise Slater says she has “always been a busy lady.” Anyone who knows the spunky 85-year-old will agree. Known as “Ms. Eloise” to almost anyone who has spent time with her, the octogenarian has become a local legend over the past seven years. That’s how long she’s been part of programs sponsored by The Blind Center in Washington.

Located at 221 Harvey Street, the center’s goal is to educate and empower the blind and visually impaired by providing “a safe haven of support, assistive technology resource, (and) independent living skills training” according to its mission statement.

Ms. Eloise credits her son with convincing her to get involved at the center after her husband died and her visual issues prevented working or driving on her own. “My son visited with them (at the Blind Center), then told me I wasn’t going to survive without something to keep me busy. He convinced the staff ladies to come and talk to me, and I gave it a chance,” she said.

Ms. Eloise was immediately attracted to the center’s opportunities for clients to reach personal goals as they obtained independence. The fact that she’s made candy since she was a toddler became a way she could find purpose as well as satisfaction.

“I can see your body but not your face,” she explained this week, while insisting that she isn’t totally blind, “just legally blind; but I don’t need to see to make candy. It’s all in my head. I was very well educated in my mother’s kitchen. I’ve done it so long that I no longer have to measure anything,” she says, about the sweets that have become so popular that her sales have raised thousands of dollars for the Blind Center. Some of the money she donates has paid clients’ ride costs for medical visits and the participants’ fees that got them to the center’s legendary fishing trips and events at Camp Dogwood.

When the COVID-19 pandemic shut everything down, Ms. Eloise used her own funds to buy items from the center’s gift store – everything from bracelets and baskets to sock monkeys – then added them to what she sells from a makeshift shop in front of her trailer. “There wasn’t room inside any more,” she said, laughing, as she opened the door to a small room that, floor to ceiling, is filled with supplies for her “store”.

Don’t ask how much she has raised in the last seven years, because Ms. Eloise will refuse to specify. “I haven’t kept up with it. And I don’t have to keep up with this, because this is a labor of love.”
Unfortunately, those who aren’t part of the gated community she calls home cannot get direct access to Ms. Louise’s goodies because of strict visitor restrictions. However, once the Blind Center reopens, the gift shop will carry most everything she offers. “I do hope this virus goes away and we can get things going really soon,” she said, “because I know darn well you’re going to come back once you eat that candy. Christmas is coming!”