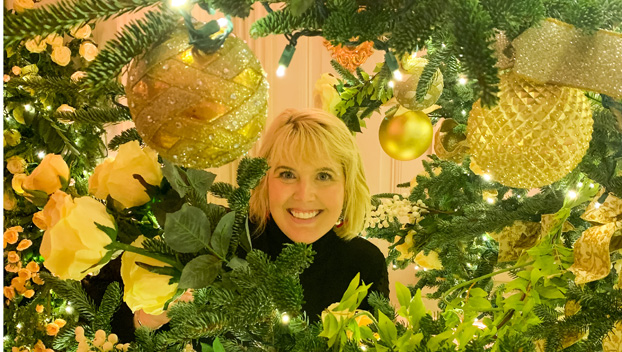 Santa Claus reads letters from kids of all ages. Washington resident Kasey Stone’s might not have made it all the way to the top, but it still paid off.

While most people were busy planning a smaller Thanksgiving menu and tidying up for less company, Stone was among 90 volunteers who were busy decorating the White House for Christmas.

She left for Washington D.C. two weekends ago to begin three busy days of bedecking on Monday, came back for Thanksgiving, then returned Monday to admire her handiwork at the unveiling reception.

Stone filled out an application online and wrote letters to the White House chief florist and the head of volunteers to hopefully stand out after being turned down the past two years. Her background as an architect, interior designer and general contractor probably strengthened her case.

“I found out I was going on Oct. 15 when I got an email,” Stone said. “I met people from all over the country and will probably stay in touch with three or four of them. Nobody asked us about our party affiliation and there were people from both sides there, but it didn’t matter. All we cared about was Christmas.”

Stone was part of a tradition that dates back to 1973 when Richard Nixon and his family recruited volunteers to help them decorate the White House. Benjamin Harrison was the first president to display a Christmas tree in the Oval Office in 1889, then William Howard Taft was the first to put one on public display in 1929. Theodore Roosevelt was the only president who didn’t have a tree because his family didn’t use one as part of their celebration.

America the Beautiful is this year’s theme and the national tree is an 18.5-foot Fraser Fur from West Virginia. It was just one of over 75 trees spread throughout the 132 room building.

Volunteers from around the country were responsible for their own travel expenses and accommodations, but the workers ate breakfast and lunch at the White House.

“The food was outstanding,” Stone said. “Everything was individually packaged, and they made holiday cookies with cider at the reception. The White House staff was really nice to us and made us feel very welcome.

The group was split into teams, led by captains who had worked on the project in previous years. Stone’s troupe worked the three days before Thanksgiving, then the other group finished the job Friday, Saturday and Sunday. The recruits reported at 6:30 a.m. and wrapped up around 5 p.m. All underwent daily COVID-19 testing, had their temperature taken every morning and were required to wear a mask while working. Stone worked in the State Dining Room, the library, the Red and Green rooms and the cross-hall.

The first day we made ornaments for all the different trees,” Stone said. The second day we made all the bows for the State Dining Room and we strung lights on the trees in several rooms. We all had specific instructions on what to do every day, so it’s not like it was a bunch of people running around trying to find stuff. We had all the supplies we needed, and things ran like clockwork most of the time.”

Nobody got a glimpse President Trump and the only time the First Lady made an appearance was at the reception. Nonetheless, Stone enjoyed every minute.

“It exceeded any expectation I had and was one of the highlights of my life so far,” Stone said. “It was amazing to sit on the floor surrounded by every decoration you can imagine and think that I’m doing it at the White House. I had been there as a tourist a few times, but there were always guides to keep us from going certain places and touching certain things. I thought of all the famous historical figures who had walked through the rooms where I was working, and it made me tear up a little. I would do it again in a heartbeat.”

Start writing those letters now. Plans for 2021 decorating endeavor already in the works.