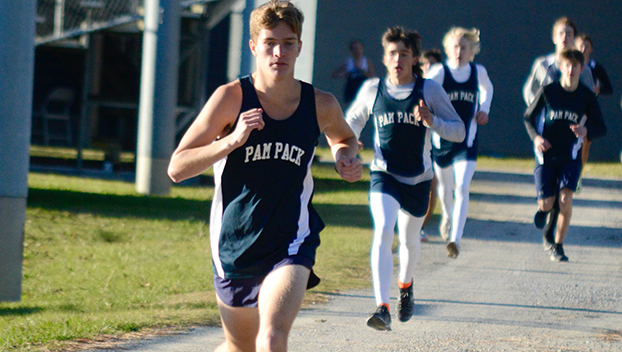 The Washington High School boys cross country team is off to one of the best starts in recent program history, while the girls are on pace to capture another conference title, thanks to an odd combination of a senior transfer and COVID-19.

The corona virus turned the usual fall sports schedule upside down, with cross country starting about the time the season was usually wrapping up. The delayed start gave runners more time to train, and also helped them avoid running in the heat of late summer and early fall. On the other hand, the conference, regional and state meets won’t start until winter approaches, leaving the harriers to deal with much colder running weather.

So far, the Pam Pack has adapted, as the girls are 4-0 and the boys 3-1, with the only loss to South Lenoir by a single point Wednesday at home.

“All 14 of them on both teams complained a little at the beginning about having to run in the cold, but they’ve adapted very well, and I think they like it better, even if they don’t admit it,” coach Dawn Landen said. “It’s easier to go on longer training runs when it’s not so hot and it’s helped us prepare for the post-season, when we know it’s going to be cold.”

Senior Ethan Sommers has given the boys team a big boost since he transferred from Southside. As a junior, Sommers finished sixth in the 1A state meet, but joined the Pam Pack in search of better competition in hopes of continuing his career in college.

He’s started his Pam Pack season with four straight meet victories by wide margins and has finished the last two races with times under 17 minutes over the 5K course.

“I’m happy with the way things have worked out so far,” Sommers said. “It’s been fun running with my teammates and being the rabbit for them to chase so to speak. I’m pushing myself to run faster and trying to help the rest of the team do the same.”

Sommers attended the Washington Montessori Public Charter School from pre-kindergarten until he transferred to Southside for his junior year, again in search of better competition. His former principal at Montessori organized a running club for the pre-K group and Sommers took it and ran with it.

“I’ve been doing this for as long as I can remember,” Sommers said. “I finished my first 5K when I was very young, and that early success kept me interested.”

He also played soccer, but injured his knee when he was seven, so running has been his main sport since then.

“Ethan has a chance to run in college because he keeps pushing himself to get stronger and faster,” said Linden, who was part of back to back WHS girls state championship teams in the late 80’s and also ran at Appalachian St.  “I know he has his eye on our school record time (16:30) that has held up since 1990. He can break it if he keeps working.”

Freshman Hailey Broadwell continues to emerge for the girls as she’s won all four meets so far as well.

“I knew Hailey would help us, but I didn’t know she would win her first four high school races,” Landen said. “She’s improved rapidly since our last home meet two weeks ago and almost all our kids are running faster than they were then. I’m very pleased with everyone’s progress and know there’s more to come.”