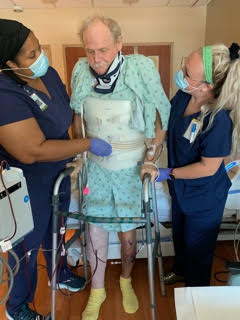 SMALL STEPS: Nurses help Phil Ryals use a walker during one of the stages of his recovery from an accident that hospitalized him and resulted in him having six surgeries to repair damage. 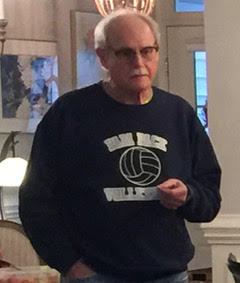 Phil Ryals doesn’t remember what happened on June 18, but his wife of nearly 50 years remembers that day vividly.

Debbie Ryals recalls wondering why Phil hadn’t returned from his routine four-mile walk through the Smallwood neighborhood. She remembers searching for Phil, only to find police cars a couple of blocks from the couple’s home on Lawson Road And she remembers hearing the news that changed the Ryals’ lives: A vehicle hit Phil while he was on his walk, knocking him unconscious and dealing him a long list of critical injuries and wounds.

Phil, who was 69 years old at the time, sustained a brain injury that ultimately erased any memories he had of the incident, as well as many broken bones in his back, neck, ribs, legs both legs and one of his shoulders.

Those injuries might have taken Phil’s life if not for the actions of former U.S. Marine Dale Clark, a fellow Smallwood resident who jumped into action upon arriving at the scene of the accident and helped clear blood from Phil’s airway while waiting for paramedics to arrive.

“I think had he not done that, we wouldn’t be talking to you today,” Debbie said in an interview Thursday.

“The young lady that was driving the car got out and just knelt beside Phil and started screaming,” she added. “They had trouble getting her to calm down, but Dale calmly assessed the scene and helped Phil. Phil’s eyes were going into the back of his head, and blood was everywhere. And he just — that Marine just kicked in.”

Today, five operations and numerous appointments later, the Ryals family is more familiar with the extent of Phil’s injuries. But in the hours immediately following Phil’s incident six months ago, with COVID-19 visitation restrictions in place at Vidant Health’s facilities in Greenville, Debbie didn’t know if or when she would be able to see her husband again.

“Because of COVID, families weren’t allowed to go into the emergency room, but they let me go in and see him for about three minutes, and I felt bad and was fixing to leave,” Debbie said.

“We didn’t know whether he’d live through the night or not. I didn’t know if I’d see him again.”

Later that night, Debbie learned that Vidant planned to change its visitation restrictions the following morning to allow one visitor per patient.

From that moment, Debbie was at her husband’s side helping him navigate through his healing and recovery process. That process has been difficult physically and emotionally, as Phil has made several trips to the operating room to have ligaments repaired and infections prevented. He has a sixth surgery scheduled, this time to repair a rotator cuff in his shoulder.

“Debbie has been an absolute angel,” Phil said. “She has looked after me better than anybody ever could.

“And it’s been tough for her, because she’s taken on the whole responsibility of the house — she’s made all the decisions that had to be made. So it’s been a tough time for her.”

Today, Phil Ryals is able to walk short distances with a walker or a cane. He tries to get out of the house whenever possible, even if it’s just for a ride down the waterfront.

He doesn’t have many options for activities, because of his limited mobility and because of the pandemic.

“That makes it doubly hard on him, because there’s not much left other than waiting,” Debbie said. “Playing on his electronics and watching TV.

“Law and Order has kept his sanity at this time,” she said with a laugh.

Debbie said having immediate and extended family members close to home has made the healing process easier, and support from the community has helped as well.

“This town has been good to us,” Debbie said.