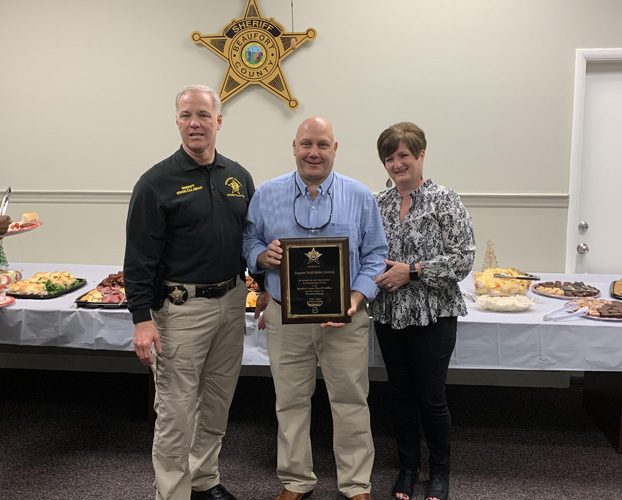 RETIRED: Beaufort County Sheriff Ernie Coleman, Walt Zerniak and Shannon Zerniak pose for a picture during Walt’s retirement ceremony on Dec. 3. Walt retired in May after a 21-year career with the Sheriff’s Office.

Zerniak retired as a sergeant, a rank he earned after seven years as a resource officer based out of Southside High School. Following his promotion, Zerniak helped provide safety and crime-prevention services at all of the county’s schools. He also spearheaded the county’s Drug Abuse Resistance Education program, better known as D.A.R.E., and it was that role that defined Zerniak’s legacy for many of the students he interacted with.

The D.A.R.E. program curriculum teaches students from kindergarten through high school about how and why they should avoid involvement with drugs, gangs and violence.

Zerniak said he didn’t truly realize how many lives he’d touched — whether it was through his day-to-day duties as an SRO or his role with the D.A.R.E. program — until the Sheriff’s Office honored him by formally retiring his badge and service weapon on Dec. 3. When his wife, Shannon made a Facebook post about the ceremony, hundreds of people congratulated Walt in the comments.

“Everyone loves to have their back patted,” Zerniak said. “But in law enforcement, you don’t count on that. You’re kind of the necessary evil. That was one of the things that were most enlightening and humbling to me, realizing how many people appreciated what I did.”

Zerniak, 53, doesn’t plan on settling down yet. He said he’s taken some time to recharge following his retirement from the Sheriff’s Office, and he’s considering some options for how to proceed with his career.

“I’ve done transports, I’ve done expeditions out of state and transports on weekends during the summertime,” Zerniak said, “so driving, something maybe in transportation, is definitely a strong draw to me.”

Zerniak said he’s thankful for the connections he made in 15 years as an SRO, as well as the five years he spent in the patrol division at the Sheriff’s Office.

“Deputies, we live, work and play here,” Zerniak said. “We go to school, have our families here. So even for my patrol days, do have people come back to me — you never know the difference you’re making, and how just one interaction can make or break a situation.”

BELHAVEN — The town government announced on Monday that Town Hall will close to the public indefinitely on Wednesday, Dec.... read more