Basketball in masks – the next COVID challenge 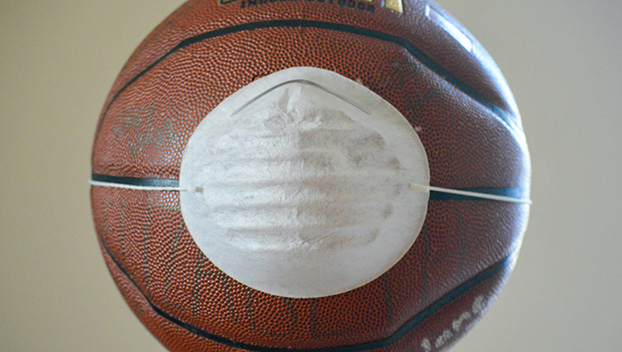 MASK UP: Basketball practice started yesterday for Beaufort County public high schools. Masks are required for all practices and games, which won’t start until January.

Local high school coaches and administrators had a feeling it was coming and now it’s official. The North Carolina High School Athletic Association is requiring basketball players, coaches, officials and staff to wear masks for all practices and games.

That was the biggest change among several announced a few days ago as official practices started Monday. Teams had been working out in small groups while masking up (no gaiters allowed), but Monday was the first day everyone practiced together.

“Everything seemed to go okay, but it’ still very different,” Washington High School boys head coach David Allewalt. “The biggest adjustment for most of them was actually being in one place with their teammates. The kids really haven’t been in school much since March and virtual learning has kept most of them out of the classroom for the most part this fall. We have a short window to get ready, so every day is important.”

Games will look very different when they start in early January right from the jump ball, which will disappear for this season. The home team will get the first possession, then the visitors will take the first alternating possession.

“The start of the game will be an adjustment,” Northside girls head coach Michele Leathers said. “You could score a quick two off the jump ball sometimes if the other team wasn’t ready, but now the offense will have to worker harder for it. The defense can set up a press to get a quick steal and maybe an easy bucket. It adds more strategy on the first possession.”

The other big change is the addition of a 60 second time out after the four minute mark (halfway) in each quarter to give the players an extra chance to adjust their mask or just breathe.

“I think it’s a good addition because conditioning will be a factor with all the teams, particularly early,” Allewalt said. “I tell our guys it’s like running in the mountains because it is harder to breathe. We have 10 seniors returning and I don’t think there is a better time to have a deep bench than this year. It should really help us to keep running experienced players out there.”

Other major adjustments include keeping the players six feet apart on the bench, which could be a challenge in smaller gyms. Chairs should be placed in alternating rows (five in front, five behind) while keeping the bench area at least six feet away from the stands. The state recommends putting the benches opposite spectator seating when possible, which is already common in small gyms.

Speaking of spectators, the current limit is 25 per facility, but nothing specific is mentioned about visiting fans being allowed.

Teams will no longer shake hands during pre-game introductions and there will not be a post-game handshake line.

“We will follow whatever rules we have to because player safety always comes first,” Allewalt said. “Our coaching staff constantly reminds our players to make good decisions off the court to keep themselves and their families safe. We are grateful to have a season at all and the last thing we need is a couple of bad decisions shutting the whole thing down. It seems like we are on a week to week basis with everything right now, but I’m optimistic we can pull it off.”