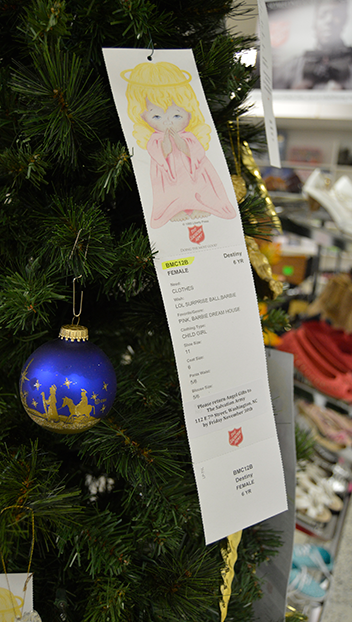 Children from all over Eastern North Carolina are served through the angel tree service provided by The Salvation Army of Washington.

“We’ve really seen things slow down. I’m not sure if it’s people not giving, people not giving what they’ve given in the past, or less people giving,” Bush said. “We’ve done our best to make donating easier and safer. At each of our red kettle stands, we have a QR code that people can scan with their smartphone and give online.”

Despite these steps to make giving more accessible, Bush says they have only raised half of their goal for the year and there are 12 days remaining to donate.

The organization supports families throughout the year across six different counties. Because of the global pandemic caused by the coronavirus, there has been more of a need for assistance from those in the community, according to Bush.

“We do financial assistance, we help with rent and utilities and food donations and I can’t tell you how much we’ve done extra because of COVID,” Bush said.

During the holiday season, The Salvation Army of Washington has several annual programs to support those in our community that reach out for assistance. The angel tree supports children in the area who do not have the financial means to celebrate Christmas.

“Angel trees started in the late 1970s and what it is essentially is a toys for kids type thing. We put tags on trees, usually at Wal-Mart and other places, and this year we have just over 450 children, most of which are in Beaufort County,” Bush said.

Of the almost 500 families that have applied for help, Bush says that many are new to the organization.

“At least 50 percent of families that have asked for angel trees or help for their children this year have never asked for that help before,” Bush said.

Distribution of the angel tree donations will take place on Thursday, Dec. 17. While many children will receive gifts, there are still angels that need to be adopted.

“We have 80 children that still need to be returned or adopted,” Bush said. “If angels are not adopted or returned, we go shopping for those angels. Families have to meet a certain criteria when they apply and we are very adamant. We don’t just let everyone apply, we make sure there really is a need.”

The remaining angels can be found at Wal-Mart, as well as The Salvation Army Family Stores located in Washington and Chocowinity.

In addition to the angel trees, The Salvation Army of Washington has an annual donation drive. The bright red donation kettle can be found at a number of stores in the local community and all money raised goes directly back into the community. This year, there has been a decrease in donations compared to years past.

In addition to the lack of donations, there is also a decrease in the number of volunteers to man the red kettles.

“Overall, for the amount of volunteers, that has slightly decreased from years past. The other decrease is in the amount of time some of the volunteer groups are volunteering,” said Bush.

Despite these hardships, Bush is still thankful for the support from the community.

“It’s affected a lot of people and we’ve really been blessed with what the community has provided. We’re called to do the most and we need support so we can do that.”

For more information, call The Salvation Army of Washington at 252-946-2523 or visit RegisterToRing.com.