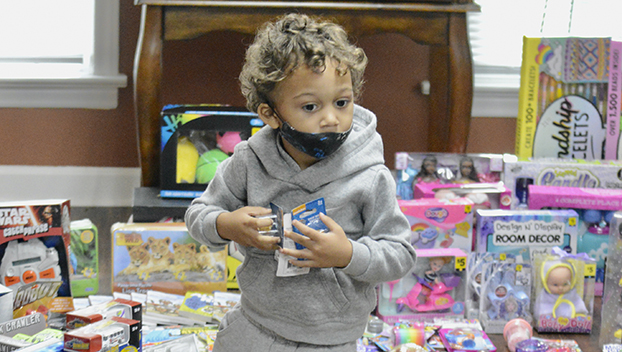 HOT WHEELS: This little guy ran straight to the miniature cars and grabbed a couple of fast ones.

The aroma of grilled chicken and hot dogs wafted across West 15th street while the bass, drums and keyboard provided the background for the first Heavenly Arms Mortuary toy distribution for vulnerable families Saturday afternoon in Washington.

The holiday spirit ran through the socially distanced and masked crowd despite a sunny sky and a temperature in the mid 60s’ as they lined up to choose a toy and eat a meal that also included chips, candy bags and soda, all provided in the name of community good will.

“It’s better to give than to receive,” said mortuary president Kelly Harper. “We know there are plenty of adults who have lost their jobs or had their hours reduced because of COVID-19. We know they are worried about having presents to put under the three, so our staff stepped up and decided to do this.”

Toys of all shapes and sizes filled the front hall as families went in two people at a time. Some surveyed the scene before making their selection, others went for the first thing they saw.

“We both like skateboards,” said seven year old Tiana Bright as she and her younger brother Christopher (6) snagged the same gift. “We’ve seen the other kids in the neighborhood playing with them and we’ve been wanting to try.” “I like the wheels,” added Christopher. “It looks like they light up.” Their mother, Nyesha Lacy was grateful for the opportunity. “We just thank them so much for doing this,” she said. “It’s a blessing and my family really appreciates it.”

“It went beyond my expectation and we will do it again next year,” Harper said. “If I don’t get anything for Christmas, I’m already blessed because I know there will be many children with smiles on their faces.”

COVID-19 state stats at a glance

Beaufort County’s confirmed COVID-19 cases climbed past 2,000 over the weekend, with 13 new cases reported on Saturday and 20... read more