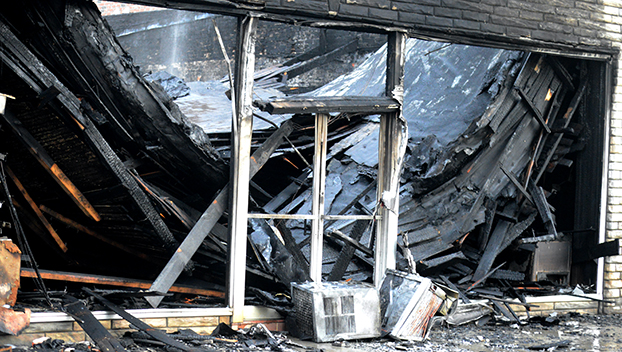 TOTAL LOSS: La Perla Panaderia bakery is a total loss after a fire Wednesday morning. No cause for the blaze has been determined.

The call came into Washington Fire-Rescue EMS around 2 a.m. and the building was fully engulfed when they arrived minutes later.

“It was a heavy fire, and the building is a total loss,” Battalion Chief Jeremy Wetherington. “Our investigation is continuing, and we need to assess the remaining framework to determine the danger of collapse. Thankfully, nobody was hurt and the damage to surrounding buildings was minimal. We don’t know what caused it.”

Around 20 firefighters from Washington and Chocowinity responded.

The Maola Ice Cream Company of North Carolina, operated by the family of Doug Currin, owns the building, which housed the bakery for the last 15 years according to Currin family spokesman Frank Styers. Eddie Chavez is listed as the business owner.

“We hate it for Eddie and his family,” Styers said. “We’d love to find him another spot because he was a great tenant. We will have to tear down and start over at some point, but we don’t’ know when or what will be there right now. We have insurance on the building, but we don’t know about the business.”

Styers said the building dates back to the 1940’s and housed The Sweet Shop from the early 1970’s to the early 2000’s before the bakery came in.

Firefighters were called to the bakery in November of 2019 to extinguish a small blaze that started in a laundry basket stored in the rear of the building. They put out the fire quickly and there was no damage or injuries.

Rachel Jordan of Rachel K’s Bakery has started a GoFundMe page to help the Chavez family. Over $2,000 of the $5,000 goal was raised in the first four hours.