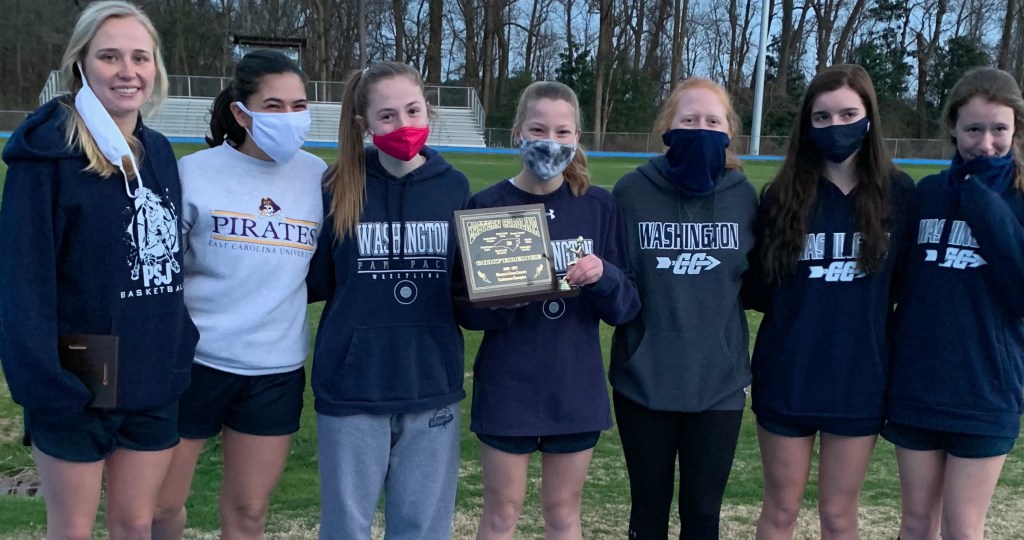 Thursday proved to be the perfect day for a cross country race as both Washington High School teams advanced to the regional tournament next weekend.

The girls had the top six finishers to win the Eastern Carolina 2A Conference title for the third straight year, while the boys finished second behind South Lenoir on their home course in Deep Run, NC.

Senior Mary Emma Holscher was the conference girls champion as she completed the 5k course in 21:58. Classmate Ethan Sommers dominated the boys field with a school record time of 16:20, breaking his own record set earlier this season by five seconds. He was two minutes faster than the second place finisher from South Lenoir.

“We were hoping to come home with both teams in the regional and both individual champions and we did, so I am very proud of my kids,” Coach Dawn Landen said. “We didn’t know until we got there that only the top two boys teams and the girls champion would advance to regionals as teams. They are taking fewer teams because of COVID, so our runners stepped up and made it happen.”

“The girls tried to stay together and run as a pack and it worked very well,” Landen said. “All six of them made All-Conference and they deserve it.”

Sommers blistered the boys field to stay undefeated in eight races this year. He transferred from Southside for his senior year after finishing sixth in the 1A state meet last year. He’s improved 45 seconds from last year and hopes to lead the boys team to their first state appearance in many years. Junior Isaac Campbell (18:21.01) was third and sophomore Luke Brown (18:41) finished fourth.

“Ethan was terrific as usual,” Landen said. “He’s worked hard to improve and it’s paying off for him. Seven of our 14 runners had personal best times in the conference meet, including Ethan, and a couple took almost 45 seconds off their best time. I am so proud that all of them ran their best so the whole team could punch the ticket to the regional.”

Croatan High School in Newport will be the site for the regional meet next Saturday, January 16th. Eight girls teams and 11 boys squads will compete for the right to advance to the state meet In Kernersville on January 23rd.