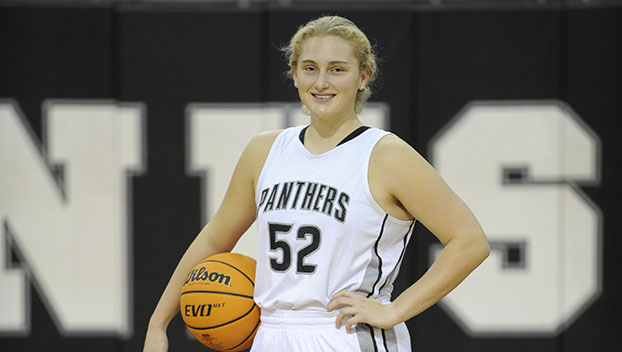 ASHLEY VANSANT|THE DAILY NEWS  SENIOR LEADER: Katie Godley is the only senior for the Northside girls basketball team this season.  Two juniors, five sophomores and four freshmen join her on the roster.

Leathers coaches both teams, which wouldn’t be a problem under normal circumstances. In a pre-COVID-19 environment, volleyball season would have ended just as basketball was beginning. But these are not normal times, and all sports were pushed back, creating a two week logjam for those involved in post-season play.

“It’s a nice problem to have, because that means we’re still playing, but it’s been hard to juggle recently,” Leathers said. “Since myself and three of our basketball players are still involved with volleyball, we decided to make the (volleyball) regular season stretch run and playoffs our priority, while still working in basketball practices when we can.”

So far, so good as the Panthers won their last three matches to finish 11-2 and advance to the state playoffs Tuesday at East Carteret. The match was not over as the Daily News went to press.

“Of course, we want the volleyball season to continue for as long as it can, but we haven’t ignored basketball,” Leathers said. “We will be young again this year, but I like my team.”

The girls blasted out of the gate with a 54-5 rout of an inexperienced Jones Senior squad Friday and won’t play again until this Friday when they travel to Riverside.

“We did learn some things from the game, but it’s tough to play under those circumstances,” Leathers said. “We’ve only had one practice with the whole team there, so we ran through our plays and worked on some things defensively. It was good that our younger kids got to play a lot.”

Leathers graduated five seniors from last year’s team that went 8-14 and has only one this year, post player Katie Godley, who is one of the three volleyball players.

Paige Sawyer, a junior transfer from Unity Christian and junior Alexis Asby, who came off the bench last year are the only upperclassmen as five sophomores and four freshmen make up the rest of the roster.

“I’m really excited about Paige being here because she is the first true point guard I’ve had in a while,” Leathers said. “She wants to be in that role, which is really important, and she brings a spark to our team. She’s stepped in quickly as a leader and will be able to push the ball on offense. She will improve quickly when we get some five on five practices going. Katie is our senior leader. I need her to step up her inside game and be more aggressive. I expect her to continue to improve.”

Mariah Jones is one of the freshmen Leathers expects to contribute from the start with her quickness and defense. Sophomore Jean Grace DeHoog’s shooting ability is a plus, while freshman Casey Rose should see significant minutes as well. Leathers said all of the above need to rebound along with sophomore Paris Jones.

“We can get the ball and go score if we rebound,” Leathers explained. “We’re looking to create points from turnovers as well. It’s been weird with COVID and juggling two sports, but we like a challenge and we’re trying to make it fun. We’re happy for the chance to play and I’m optimistic that we will have a good season.”