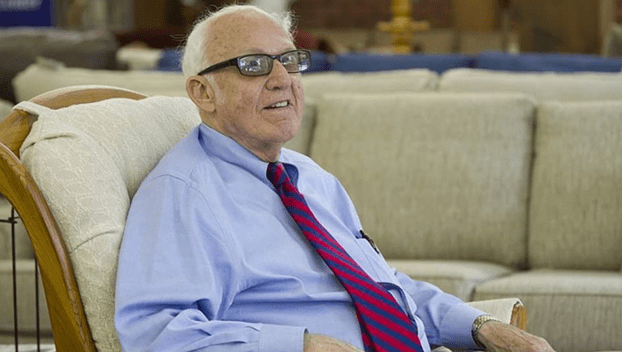 Mr. William “Billy” Earl Jefferson, Sr., age 87, a resident of Chocowinity, NC died Sunday January 17, 2021 at his home with his family by his side.

The family will receive friends following the service at the cemetery and other times at the home.

Mr. Billy was born in Beaufort County on June 17, 1933, son of the late William Robert Jefferson and the late Rosa Leigh Cox Jefferson.  He was a 1952 graduate of Washington High School.  On February 1, 1953 he married, the love of his life, the former Mary DeVere Hodges who survives.  Mr. Billy, known as the “rocking chair man” on Main Street, was the owner/operator of Big Bargain Furniture Store in Washington since 1961.  He was a member of the former Chocowinity Ruritan Club, a current member of the Washington Chamber of Commerce, and served on the Beaufort County Board of Education for thirty years.  Mr. Billy was a well-respected member of his community and was nominated and received the honor of “The Order of the Long Leaf Pine” in 2003.  He was also inducted into the North Carolina All State School Board.  He was also a member of Hodges Chapel Pentecostal Holiness Church.  He loved singing in the choir at his church, collecting Cadillac cars, rocking in his chair at his store and socializing on Main Street.

In lieu of flowers the family kindly asks that memorial contributions be made to Hodges Chapel PH Church, 2564 Taylor Road, Chocowinity, NC 27817 or to an educational scholarship fund of the donor’s choice.