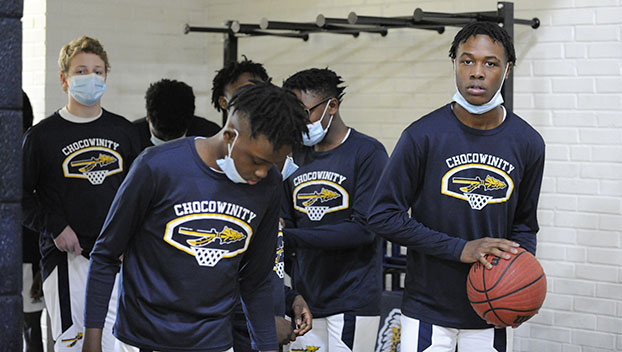 GAME TIME: 8th grader Ja’von Williams (far right) and the rest of the Chocowinity Indians are ready to hit the floor for Wednesday’s game against Bath. (Ashley Vansant/Daily News)

The Chocowinity boys and the Northeast girls sit atop the Inner Banks Athletic Conference standings as the season nears its COVID-19-delayed midpoint.

The Indians are 6-0 after a 68-30 victory over Bath Wednesday at home. Josh Green came off the bench to hit four 3-pointers to lead the Tribe with 12 points. 6’2 8th grader Ja’von Williams and 7th grader Chaise Smith had 10 in limited playing time.

Chocowinity led 37-8 at halftime and were in control of the action wire-to-wire. They went undefeated in conference play last year and are looking for their third straight IBAC league title.

“Eight of my 10 guys from last year return, so they know each other and play very well together,” Indians coach Alan Swain said. “Ja’von averages around 20 points a game and Chaise (Smith) and Mylaki Dennis are strong players for us also. There has been a wave of talent coming through here the last few years and if you stick around a while sometimes you get lucky. They are a fun group to coach.

Northeast Elementary and the St. Peters (Greenville) Blue team are a distant second in the standings at 2-1. Bath is 3-3, St. Peter’s Green is 1-3, while Snowden and Bear Grass are 0-3.

The disparity in the number of games played is because Bear Grass and St. Peter’s have been in quarantine with COVID-19 outbreaks, which has thrown a wrench into several teams’ schedule.

“Postponing games has been tough, and it will be hard to get them all made up, but it’s better than not playing at all,” Swain said. “That’s why some of them come to school. We’ve adapted well wearing the mask and Dr. Cheeseman (BCS Superintendent) bought us a season supply so we can change them frequently. Any outlet is good for these kids and we could be in the same boat as Pitt County.”

Public middle schools in Pitt County are not playing basketball this winter because of COVID-19. The decision also affects P.S. Jones of Washington since their conference is made up of teams from Pitt and Greene county.