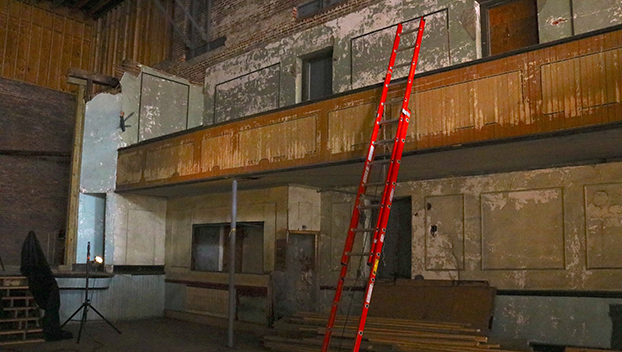 WORK CONTINUES: Repairs at the Turnage Theatre are now focused on renewing the Vaudeville Theater, which was originally built in 1913 and made Washington a popular destination for traveling performers. (Chelsea Hofmann / Washington Daily News)

The Turnage Theatre has received a grant totaling $750,000 through the Emergency Supplemental Historic Preservation Fund to repair structural damage incurred from Hurricanes Florence and Michael.

“It’s a national park service grant that is addressing repairs and resiliency from and for future hurricanes,” said Debra Torrence, the executive director for Arts of the Pamlico. “Everything that was open before we could rebuild it for the last several years really caused a lot of damage.”

Water damage from hurricanes Florence and Michael hit the Turnage Theatre hard. Water from the storms entered the building through the wooden roof, and now that a roof replacement has been completed, the Arts of the Pamlico has set their sights on the next phase of renewing the historic building.

“The roof has been partially repaired, which we finished, and this is the next step,” said Torrence. “Once water gets in a building, especially a historic building, things start to fall apart.”

Repairs will be made to masonry, structural reinforcements and windows within the historic space that has been a mainstay on main street for over 100 years. The work will mostly occur in the vaudeville playhouse located on the second floor.

“We’ve got a very badly damaged interior in the vaudeville space from all the water intruding,” said Torrence. “We’ve got to replace and repair what we can with the balcony and the stage and the proscenium and all the things that have just fallen apart because of the water.”

Built in 1913, the vaudeville playhouse was originally the only theatre located in the Turnage. The second theatre was built in the mid 1930s and both featured various events and shows until the 1970s. The space was left empty for some time until renewed interest saw renovations and the Arts of the Pamlico purchasing the building in 2013.

The vaudeville restoration will begin in July and is one of 22 historic preservation projects to receive funding through the Emergency Supplemental Historic Preservation Fund. For updates on the repairs, please visit the Arts of the Pamlico website at https://www.artsofthepamlico.org/.