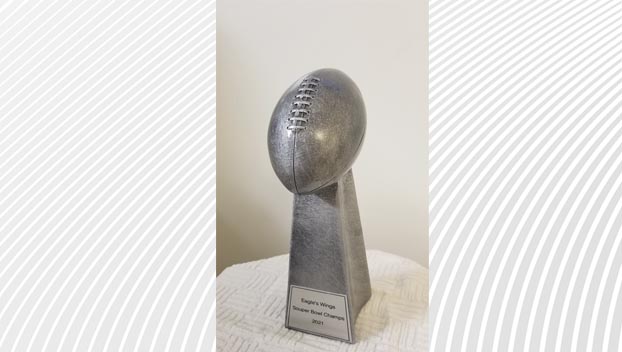 TROPHY: Eagle’s Wings will present a trophy to the Beaufort County church that raises the most money during the Souper Bowl of Caring.

On Feb. 7, the winner of the Super Bowl game between the Kansas City Chiefs and the Tampa Bay Buccaneers will take home the Lombardi Trophy. Around that same time, local churches registered for the Souper Bowl of Caring will see who takes home a trophy for raising the most money for local hunger-relief charities.

The Souper Bowl of Caring is a national organization that works with churches, schools, civic groups and others to fight hunger. Founded in 1990, the organization has raised approximately $160 million for hunger-relief charities across the nation, according to its website.

To participate in the Souper Bowl, teams can register at https://tacklehunger.org/register-participant/; to be eligible to compete for the Beaufort County Souper Bowl trophy, which is provided by Eagle’s Wings food pantry in Washington, church teams need to call 252-975-1138. The trophy competition is for local churches, but schools, businesses, charities and other groups can participate in the national Souper Bowl drive.

Each team participating in the Souper Bowl chooses a local food charity they want to support, and decides whether they want to collect food, money or both for that charity.

In the days leading up to Super Bowl Sunday, the teams can hold drives — either in –person or virtual — to collect those resources. Following the game, teams are instructed to use the Souper Bowl website to log the total amount of donations they received, and deliver those items directly to the charity of their choosing.

Churches competing for the Beaufort County trophy will also need to let Eagle’s Wings know the final tally of the donations they took in. The church with the highest amount of money raised will win the trophy.

“The real winner will be the food insecure of Beaufort County,” said Jim Reed, pastor at Asbury United Methodist Church and member of the Eagle’s Wings board of directors.