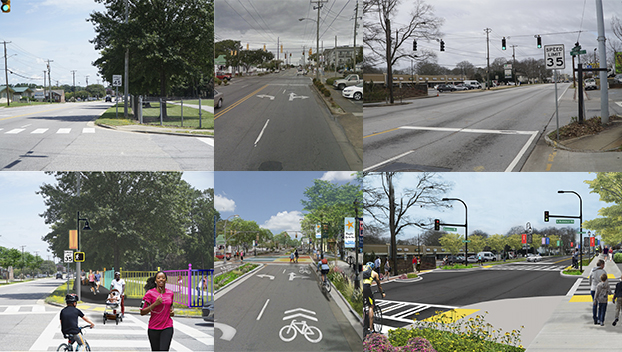 The renderings show before and after versions of projects Stantec Engineering completed (from top to bottom) in Rocky Mount, Beaufort and Avondale Estates, Ga. All are possible components of the 15th Street redesign project.

Left turn lanes and sidewalks will go a long way toward making the street safer and easier to navigate for drivers and pedestrians according to votes tallied during the presentation.

Stantec, the engineering services company the City of Washington hired to redesign the 1.6 mile corridor between Carolina Avenue/U.S. 17 and Brown Street, has put great emphasis on public input during the project planning stage and more than 80 citizens joined the symposium to voice their opinion.

In an earlier online survey, Washingtonians said driving and walking were the two most frequent ways they used the road. Left turn lanes and sidewalks are the best ways to improve both according to symposium participants.

“I’m on that road a lot driving and walking, and sidewalks would help a lot,” Smallwood resident Dominic Reisig said. “The other ideas they talked about are interesting to think about but making it safer is the most important. It would be nice to make it more attractive as well, but it would also be nice to make a left turn without worrying about being rear-ended.”

Stantec introduced the concept of a complete street-one that is safe, comfortable and convenient-with tradeoffs.

“Right now, the plan is to work within the existing right of way, which means not taking property to widen the street,” project engineer Mike Rutkowski said. “However, there will be tradeoffs because there is no perfect solution. Public input is vital toward determining priorities as we move ahead and that’s been great so far.”

City Manager Jonathan Russell said there would be some drainage improvements to the street as well, thanks to a $3 million grant from the Golden Leaf Foundation.

“We know flooding has been a problem along 15th Street for years and this project will allow us to hopefully improve that,” Russell said. “We’re continuing to build consensus on the best ways to make the road safer and we’ve made good progress so far.”

The North Carolina Department of Transportation owns the road and will foot the bill for improvements.

DOT presented a plan four years ago that a previous city council voted down, after vocal opposition from some 15th street residents and business owners.

The current plan to work within the existing right of way is meant to pave the way for DOT approval while having minimal impact on property.

“Once we’ve established the priorities, we can go to work on the specific improvements,” Rutkowski said. “We’ve worked on many similar road projects around the state and they’ve turned out pretty well.”

“It was a great way to present possible uses in the future, but the bottom line is the plan has to be something DOT will approve of and pay for,” mayor Donald Sadler said. “I’m very pleased that we’ve had so much public input and I’m hopeful Stantec will come up with something based on that input that will make 15th Street safer for drivers and more pedestrian-friendly.”

City officials said almost 350 people have filled out the online survey and over 225 have left comments on the interactive map. The survey will be available until March and can be accessed through washingtonnc.gov.