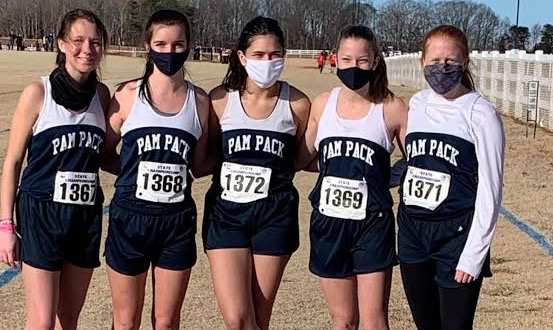 The Washington High School girls and Northside boys had high hopes for a strong finish in Saturday’s state meet to wrap up the longest cross country season in memory. COVID-19 threw a last minute wrench in the plan.

After starting workouts in July without knowing when the season would start, both schools did well in conference action, then finished third in their regional meet, which earned the WHS girls and the Panthers boys spots in the state meet as teams.  Two Pam Pack boys, senior Ethan Sommers and junior Isaac Campbell made it as individuals, as did Northside senior Caroline Boyd.

The Panthers never left home because of a contact tracing issue that put them in quarantine for the weekend, while the Pam Pack girls competed without two of their top runners for the same reason.

“My seniors have had the same goal for four years-to make it to the state meet and they did it this year,” Pam Pack Coach Dawn Landen said. “While we were all very disappointed that one of them and another of our top five runners couldn’t compete, I think the girls are proud that they did achieve their goal. All who did compete ran very well and we’ll look forward to more success in the future. Hailey (Broadwell), Aspen (Sommers) and Olivia (Paszt) plus some strong incoming freshmen will give us another shot next year. I’m proud of my seniors and will miss coaching them.”

Broadwell led the Pam Pack with a 53rd place finish as a freshman. Seniors Chandler Woolard, Stella Frisbie and Heba Al Sundani and Sommers, a junior, rounded out the squad.

Senior Ethan Sommers was 19th in the boys race, while junior Isaac Campbell was 86th in his first state tournament race.

“Ethan’s time (16:59.23) was better than last year on this course (when he ran for Southside) and Isaac gained valuable experience for next year,” Landen said.

Meanwhile, Northside coach Bob Girani’s runners went from preparing to compete in the cold to being stuck inside with the season over.

“It was all very sudden,” Girani said. “We were excited and looking forward to it one minute, then it was a no go the next. I feel the worst for Caroline. She’s worked hard and was great to coach, so I hate it for her. All the boys will have at least another year, so they’ll have something to look forward to. I’ve never had a group develop and improve over the course of a season like these kids have. They are very coachable and are fun to be around. It’s too bad that we couldn’t finish what we started, but you have to roll with the punches sometimes. It’s a life lesson that’s tough to accept, but it will help them cope with the adversity they will face later in life.”