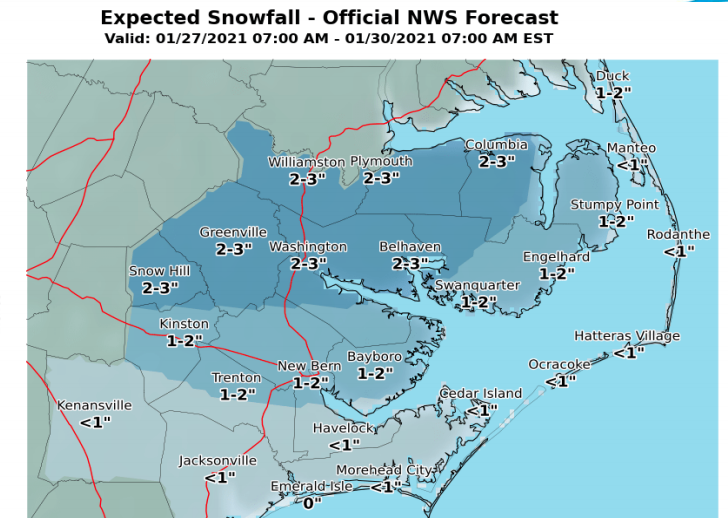 From the National Weather Service

Beaufort County will likely get up to 2-3 inches of snow late Wednesday night and into Thursday morning, according to the latest update from the National Weather Service.

The highest accumulations will likely happen along and north of U.S. Highway 264. The area expected to get between 2-3 inches of snow extends as far to the north as Williamston, Plymouth and Columbia, and as far to the west as Snow Hill and Greenville.

The NWS cautions that hazardous travel conditions could be present where the heaviest snow falls. The NWS projects that the period of greatest impact will be early Thursday morning through mid-morning, with a peak during the morning rush hour.

The anticipated snowfall comes from a storm that is also projected to cause minor coastal flooding of 1-2 feet in areas adjacent to the southern region of the Pamlico Sound.

In anticipation of inclement weather, Beaufort County Schools announced that it would run on a remote learning schedule Thursday, with all staff reporting to work on a two-hour delay. The City of Washington is also operating on a two-hour delay, meaning city government offices, facilities and services that are currently open to the public won’t open until 10 a.m. Thursday.