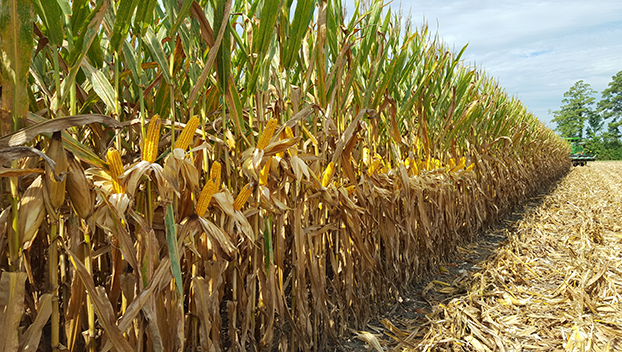 TOP CROP: Beaufort County is the top producer of corn in North Carolina with over 5.4 million bundles harvested in 2019. (Photo submitted by Rod Gurganus)

Beaufort County is the number one producer of soybeans and corn for grain in the state of North Carolina, according to a recently released agriculture review of 2019 from the North Carolina Annual Statistics Bulletin.

“We’re blessed to have a lot of acres that are devoted to corn and soybeans and that shows in these numbers and where the county ranks each year,” said Rod Gurganus, County Extension Director for the Beaufort County Cooperative Extension.

Other crops produced in Beaufort County during 2019 include over 26,000 bales of cotton totalling over 12.6 million pounds, and 280,000 bushels of wheat. The county ranked 13 and 12 in the state, respectively.

“Our ranks in livestock numbers are at the opposite end of the spectrum. We are a crop county primarily. We do have some swine production here,” said Gurganus. “We’re in the top quarter roughly, but we used to have more and things change over time. That production has just shifted to the south and west.”

In the most recent Census of Agriculture from 2017, Beaufort County produced just over 6 million dollars worth of tobacco. This number is down from the 7.4 million dollars in sales from the 2012 census of agriculture.

“Our tobacco acreage has shrunk down to a very small number, that’s for sure. We never were huge in tobacco but tobacco across the state was a big crop for years and that production has shifted some and it’s not what it once was for us,” said Gurganus.