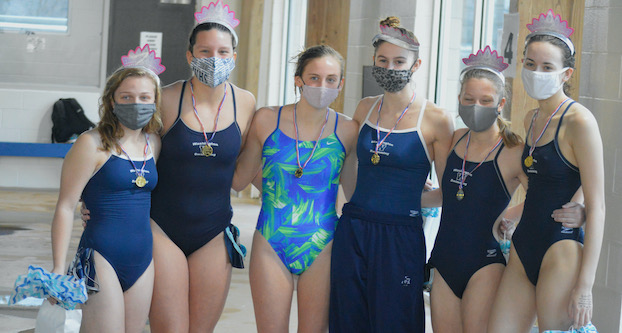 Washington High School swimmers wrapped up a COVID-19 abbreviated season with senior night activities Wednesday with an eye toward the regional meet next week.

The girls spilt their eight regular season contests, while the boys were 3-4-1, with the tie against East Carteret in the season opener in early December. All were dual meets because of COVID-19 restrictions.

“All of them helped me so much this year,” first year head coach Kendall Cox said.

“Anna and Tristen were our captains and I turned to them whenever I had a question.”

Washington had home pool advantage for every meet, because their opponents’ facilities weren’t large enough to comply with the COVID-19 restrictions on the number of people who could be in the pool area. They practiced and competed at the Moore Aquatic and Fitness Center at the Susie McConnell Sports Complex.

“Everything about hosting a swim meet was new to me and I learned a lot,” Cox said. “There’s a lot of paperwork getting everyone entered in the proper events, learning how to input the times into the meet computer, finding volunteers to run the computer and time all the events. There’s a ton of behind the scenes work that goes into it, but I would still rather host and go home than ride the bus for an hour and a half each way.”

Cox took over this winter for Kaitlyn Richards, who along with Darah Cole and Amy Craft helped Cox, a volleyball and soccer assistant coach, learn the ropes.

“I couldn’t have done any of this without them, it was a true team effort,” Cox said. “Coach Richards couldn’t do it full-time this season, but she’s been a huge help in keeping me organized. Darah has helped the swimmers in warm-ups and with their techniques and Amy knows how a meet is supposed to run. I’ve had great support from the parents as well.”

The regional meet in Cary next weekend is next on the schedule. The field for each event is determined by qualifying times during the regular season and won’t be announced until early next week after all meets are complete.

Pake was the only junior on the 200 yard Medley relay and 400 Freestyle relay teams that finished eighth at the state meet last year. He also finished 10th in the 100 Butterfly.

Now, he’s the only senior swimming with three sophomores, Connor Lewis, John Hinchey and Austin Waters, in the medley relay, while junior Jackson Wilder is part of the freestyle relay. Pake has also won the 200 Individual Medley, the 100 Backstroke and the 100 Butterfly during the regular season.

On the girls side, Craft, Woolard and Yoder have teamed with sophomore Abby Lewis for several victories in the 200 Medley and Freestyle relays. Yoder has found success in the 200 Individual Medley and the 100 Freestyle, while Woolard has been strong in the 50 and 100 Freestyle. Spruill has also won the 50 Freestyle event.

“They’ve all lowered their times since the beginning and hopefully, we’ll get most if not all of them into the regional,” Cox said. “Swimming is an individual sport within a team sport, and they’ve all been very motivated to put in the work that it takes to improve.”