STEM and Cornerstone team up for students 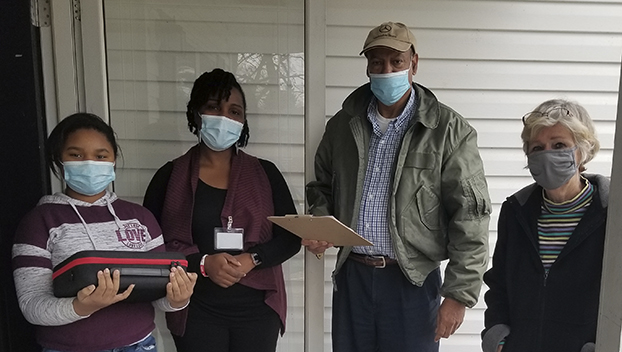 It was a happy moment for P.S. Jones Elementary School student Aniyah Gilbert (second from left) and her mother Gwen Gilbert (next to Aniyah Gilbert) as she was presented with one of 20 drone kits from IBX STEM Center President Alvin Powell (right) and Alida Sawyer (left), Program Director of Cornerstone 21st Century Learning Center, at far right. The drone kits will be used in an innovative on-line program coordinated by Powell and Sawyer, to give students a taste of tech and, potentially, help them define their interests and direct their career paths. (Karen Thiel/Washington Daily News)

Twenty excited students will get a taste of tech in the next few weeks, courtesy of a self-paced on-line drone program designed by Alvin Powell, founder and president of the Washington-based IBX STEM Center. The effort is being coordinated by Powell and Alida Sawyer, Program Director of the Cornerstone 21st Century Community Learning Center, who screened and chose the participants, a diverse racial blend of middle school students from Washington and Chocowinity.

Powell said the combined effort is a first for Beaufort County’s many student-focused agencies. “For us to combine resources and actually deliver kits in person is unprecedented in this area. It has been awesome to partner up with Cornerstone, for two organizations to trust each other enough to put a program together to help the kids,” he said, adding that this partnership is an outgrowth of several years’ cooperation between the two groups. “We’ve been working together for several years, looking at various options, ways to implement some of our STEM programs into Cornerstone’s summer camps.”

Sawyer said she immediately saw the value of a virtual program in the midst of the Covid-19 pandemic. “We were seeking something extra that our kids could be involved in, and this doesn’t cost us anything for Cornerstone other than the time it took to choose the students who will most benefit from the drone program.”

Sawyer and Powell both emphasized the importance of offering an interesting, challenging virtual program to area students who have been quarantined because of the pandemic. Powell stressed that the 20-hour, self-directed program is right for this moment because the pandemic is “putting a lot of emotional trauma on students and teachers. Social isolation directly contributes to a decrease in learning, especially with high-risk kids who were already struggling with science and math before the pandemic.”

Sawyer agreed. “There is a lack of consistency for the kids due to Covid. The schools are trying to provide a little extra to these kids to have something to do at home, but they can’t do everything. We decided to partner with the STEM Center because we had set aside a chunk of our grant allotment to make sure our kids will have summer camp this year. As a result, we didn’t have funds to pay for a similar drone program. Alvin was trying to find students he could get his drones to, so we just decided to put them together,” she said.

Washington resident Gwen Gilbert, whose 11-year-old daughter is one of the 20 participants, said the drone program will be a highlight of Aniya’s school year. “Ms. Sawyer found an awesome way for Aniyah to stay virtual but still engage with other students,” she said, adding that Aniyah was chosen, in part, because the “techi-ness” of the program caught the youngster’s interest. “She wanted a telescope when she was four years old so she could see the Milky Way,” Gilbert said of her daughter, who has loved “anything regarding math, science, biology, flying, and anything outside since she was in kindergarten. She has told me she wants to be a paleontologist when she grows up. This program is a next step toward her goal.”

More information on the drone program is available at ibxstem.org.