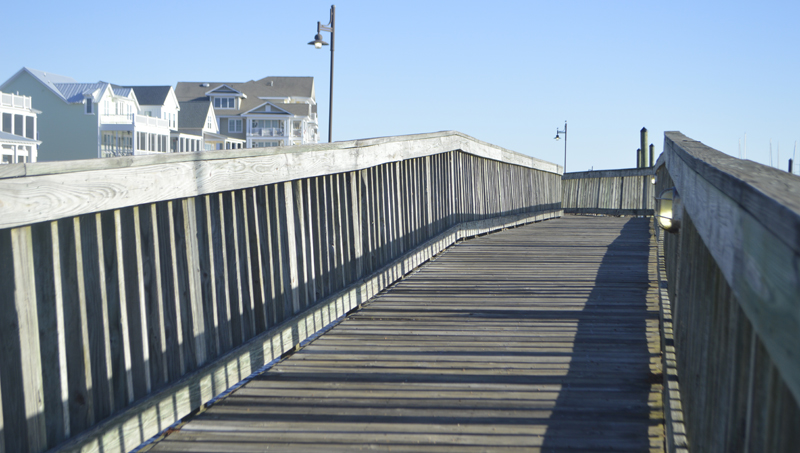 The authors of this column are Washington City Council members Virginia Finnerty and Betsy Kane.

The Lumberyard or “Moss East” site is a 6.75 – acre tract that lies between the public rights-of-way of Charlotte and Mac Nair streets in Washington. It includes about 950 feet of shoreline on the Pamlico River. The development company that purchased it seeks three permissions from the city: rezoning, variances from the subdivision regulations to allow more flexibility, and subdivision plat approval for 49 new houses. The rezoning was granted last fall. The variances and subdivision approval are now pending review by the Washington City Council.

We are proposing that the City Council ensure substantial public access to the water in the development of this keystone tract. Specifically, we want to preserve the potential for a waterfront boardwalk extension, with access points as public parks on the property connecting the boardwalk to the adjoining city streets.

The city’s plans and ordinances intend and provide for such public access in new development:

— The city’s adopted 2013 Comprehensive Land Use Plan – based on citizen input – states that the city will continue to enhance and expand public access to the water’s edge, expand its waterfront promenade, and provide additional places of community access to the waterfront.

—The Subdivision Ordinance states the city can require areas for public open space systems and recreation. Since 1996 it has provided the mechanism for obtaining, by purchase, public parks and connections when new subdivision plats are proposed, as now.

These provisions are not new, nor are they unusual. Towns across North Carolina have similar ordinances to require the dedication of parks and public access. This routine part of subdivision approval is the way towns obtain and create water’s-edge greenway and parks networks, like those in New Bern, Greenville, Smithfield, Manteo, Clayton, Corolla, and many others across the state.

The timing is critical. The subdivision of a tract is when subdivision requirements, such as provision of public open space and walking connections, kick in.

Will the city give away its permissions, allowing the entire waterfront of the property to be private-access only – like so much of the rest of our waterfront county?

The choice before Council is clear: Council should condition its approvals to preserve an option for waterfront public access. This chance will never be available again.

We are advocating for access to a boardwalk with points of attachment to the public street network (such as at the east and west edges of the tract). For a quality experience, there should be a resting point near one end of the boardwalk – a widening of the boardwalk with seating, and a public park with a view down the river.

Fortunately, the mechanisms for obtaining this public access and recreational land are laid out clearly in the Subdivision Ordinance:

— The city would have four years to exercise the option by purchasing the specified easement and land.

— The Subdivision Ordinance states how the purchase price will be determined: It is the “agreed raw land value” which is the “fair market value of the recreation area before improvements or development.”  An appraiser is retained as necessary.

With the purchase price known, the city would have four years to plan and apply for grants to pay for the easement and the improvements.

Grants for public water access are available from the Clean Water Management Trust Fund, the Coastal Area Management Act, and the Parks and Recreation Trust Fund. These state trust funds award over $7 million each year for acquiring parkland and constructing public waterfront access. Our city has experience using these grants, which would likely cover 80% of the costs. All costs would be known before the city acts.

After four years, if it is determined the project is not feasible, the option would not be exercised, it would expire, and the city would lose only $100.

Let’s preserve the option for public access before the opportunity is lost forever.

Washington is fortunate that our rules provide for this. Developers expect to encounter these rules as part of the development process. They employ real estate agents and zoning specialists to confirm the rules before investing.

It’s a company’s mission to be profitable for its investors. It is the duty of a City Councilor to advocate for the public’s interest and the goals of the city’s strategic plan. Our priority is the well being of Washington.

The public has, by consistent effort and investment over decades, added value to properties including the lumberyard tract. All taxpayers of Washington, non-profit organizations, city leaders, and individual efforts have created an inviting downtown and neighborhoods, where everyone wants to be.

There are many waterfront tracts in Beaufort County, but the lumberyard tract is more valuable than others because of its location in our town – among publicly-funded amenities like a public market, arts organizations, sidewalks, museums, boardwalks, revitalized downtown, parks, and publicly provided water, sewer, electric, and public safety and fire protection services.

The profit motive, and the public’s interest, should be balanced as the City Council considers granting additional development permissions. This balance is part of the give-and-take of development review — a normal, routine aspect of development approvals. Washington is no different from other forward-looking towns this way.

Other cities envy our waterfront amenities, accessible by all people – but they didn’t happen by accident. They are a legacy of years of public visioning, dynamic leadership, and steady public investment.

We can’t rest on past accomplishments as we grow – let’s continue enhancing and expanding our network of waterfront parks, walkways, and boardwalks. Let’s use the tools provided in our Subdivision Ordinance to preserve the option of public waterfront access.