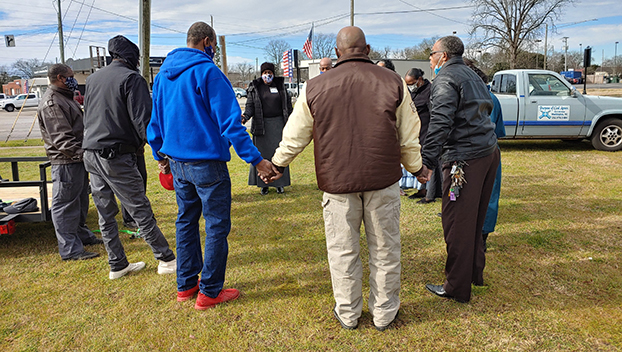 Bishop Samuel Jones, at right, leads volunteers and members of his staff as they dedicate the morning’s outreach, asking that what they do will bless many people and honor Jesus. (Karen Thiel)

Drivers on Carolina Avenue have craned their necks for two weeks now, as volunteers at King Chicken hand boxes filled with food and love to anyone who asks. The effort, called Miracle Meals, is the newest outreach of the Purpose of God Evangelical Outreach, led since 1999 by Bishop Samuel Jones.

“The new program is not a new idea,” Jones said, adding that he’s been encouraged by people all over Beaufort County since last year, when he attended the Washington Women’s’ Bible Study “Heart to Heart” conference at Harvest Church. “I gave a presentation about our work, and was one of several groups that received a donation,” he said, one conference attendee invited him to inspire her fellowship group with his story.

“There was something about him that just stood out to me. He reminded me of my husband’s spirit and tenacity. He is an action-based man who doesn’t sit still very long, anywhere,” said Susan Stancill, who runs Stancill’s Wild Game Processing in Ayden with her husband Alan. They stayed in touch with Jones and became financial donors when they learned he was working on a food outreach. Jones said their generosity and confidence became another building block in his efforts to feed Washington’s need; he had already been distributing food boxes from Billy Taralton of Grifton Mission Ministries, an outreach that has met the food and housing needs of residents from Beaufort County and beyond since Hurricane Floyd in 1999.

That confidence has multiplied over the last two weeks. The Stancills convinced their pastor, Tim Butler of Peoples’ Baptist Church in Greenville, that helping the Miracle Meals program was a logical extension of the church’s food outreach. A total of 576 boxes of food, from Peoples’ Baptist and Grifton Mission Ministries, have been given to Washington residents over the last two weeks, from those tents at King Chicken, where owner Zach Moore said it’s a privilege to lend that corner to the ministry.

“Any time he needs anything, I try to help him. Bishop and his wife do great things for the community,” Moore said. “I was there last Thursday. He and his staff worked like a well oiled machine to give out food to needy people. It was amazing.”

Bishop Jones said it takes longer to put up the tents and unload all that food than it does to hand it to drivers who swarm the lot. He said his volunteers gave away 130 boxes of food in 20 minutes last Saturday, and 255 boxes in 27 minutes last Thursday. Asked if he worries that people will take advantage of his generosity, Jones smiled and said that’s not his concern. “I trust God to deal with their consciences, just as people give me this food and trust me to do the right thing. If they come, I trust that they are hungry. I’ll give them food and let God deal with their motives. I just want to feed people and be like Jesus.”

The next food event is scheduled for Wednesday, Feb. 10 at 10:30 a.m., then weekly on Tuesdays and Saturdays at 10:30 a.m. for as long as possible, always at King Chicken. Rain cancels the event. The group’s Facebook page – “POG Annex” – will include schedule updates, and the ministry office can be contacted at 252-974-1484 for more information.