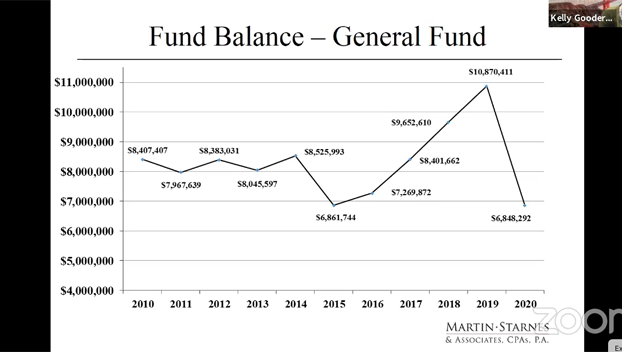 Kelly Gooderham, audit director at the accounting firm Martin Starnes and Associates presented Washington’s audit report for the fiscal year 2019-20 to City Council on Tuesday. At the end of her presentation, Mayor Donald Sadler asked Gooderham if the city was financially sound.

“You definitely have a lot of projects going on that are going to be for the betterment of the city, so I would say so,” Gooderham replied.

The city’s general fund revenues decreased by $721,845, or 6%, in comparison to the previous fiscal year, a drop Gooderham attributed to FEMA revenues that were received in the prior year, as well as a drop in sales tax and occupancy tax revenues during the COVID-19 pandemic.

Meanwhile, the city’s general fund expenditures rose by about $1.4 million, or 10%, due to salary increases as well as jumps in “contracted and professional services expenditures.”

Per the audit report, Washington received $4,593,630 in ad valorem tax revenue, a small drop of less than $4,500 from the year prior. The highest percentage of general fund revenues came from ad valorem taxes (40%), other taxes and licenses (26%), unrestricted intergovernmental funds (18%), and “other revenues,” a category that includes restricted intergovernmental funds, permits and fees, sales and services, investment earnings and miscellaneous revenue (16%),

The categories accounting for the highest general fund expenditures were public safety (49%), cultural and recreation (18%), general government (17%) and other expenditures (16%).

“I think it’s worth noting that in this past year we’ve completed large projects, with the streetscape project,” City Manager Jonathan Russell said. “We have allocated funding to move forward with our new police station site, as well as the paving project that took place at the airport — and then some smaller things with parks and recreation.”