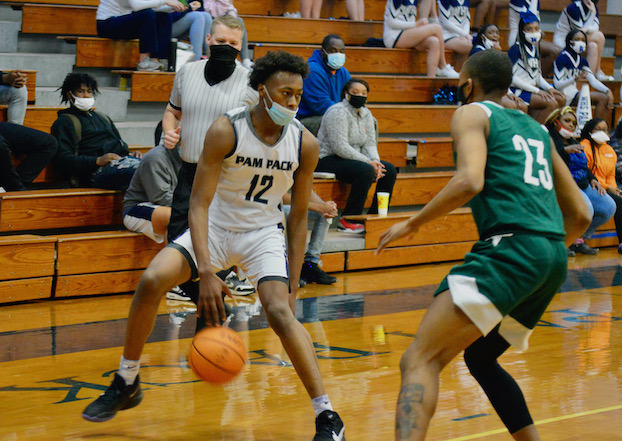 The Washington High School boys basketball team will be celebrating the program’s first conference championship since Dominique Wilkins led the Pam Pack to back-to-back 3A state titles in 1978 and 1979 if they defeat South Lenoir Wednesday night at home.

It’s a two or three game sprint to the finish for the three area schools that will determine their post-season fate. Here’s what we know:

West Craven has canceled the rest of the boys basketball season because of COVID-19 contact tracing issues, which leaves the Pam Pack with two games next week.

There is no conference tournament for any North Carolina basketball team this winter because of conflicts with the delayed football season and other sports. The top two teams in each league automatically qualify for the state tournament with some wild card bids to be awarded.

WHS is 6-1 in the Eastern Carolina 2A conference and has already wrapped up a playoff spot. However, the Pam Pack (6-2 overall) can clinch the league title and a number one tournament seed with a Wednesday night home win over South Lenoir. Greene Central is the final opponent Friday and WHS has beaten both teams earlier in the season.

“We have worked hard get here and it would be tremendous to celebrate the first league title in 42 years, but we still have to go out and play,” Coach David Allewalt said. “Our players have made good decisions off the court to avoid COVID-19 so far and we hope that continues. Our defense and rebounding have improved greatly since the season started. We are communicating better with each other and our transition offense has been very solid. We are hoping we get a chance to finish what we’ve started.”

The Southside boys (6-3) are in third place in the Coastal Plains 1A conference, behind traditional heavyweights Pamlico County and Riverside.

Pamlico is currently in quarantine, so last night’s boys and girls games against the Seahawks were postponed.

That leaves a trip to Jones Senior on Tuesday and a home game against Riverside on Friday before a possible post-season game.

The Northside boys are 2-7 overall and 1-7 with four conference games left.

Junior Kiefer Boyd leads the Panthers in scoring with 13 points a game.

On the girls side, Southside is in second place in the league with a 4-2 record with three games next week, including a trip to league-leading Pamlico County. Jones Senior and Riverside are the other two opponents.

“I think two wins out of three would get us to the state tournament,” Coach Milton Ruffin said. “It’s been a crazy season dealing with COVID and it would be a good reward for the players if we made it.”

Sophomore Ka’nyah O’Neal leads the Seahawks, averaging 30 points and 15 rebounds a game from her guard position.

“She’s done it all for us and improved her ball handling and on court vision,” Ruffin said. “She’s faced a box and one every game and still scored against it and her defense is much better. She’s a great team player and is only going to get better.”

The Northside girls are in fifth place with a 3-3 record with three games left.

The Washington girls have struggled through a COVID-19 delayed rebuilding season at 0-4 with three conference games left.