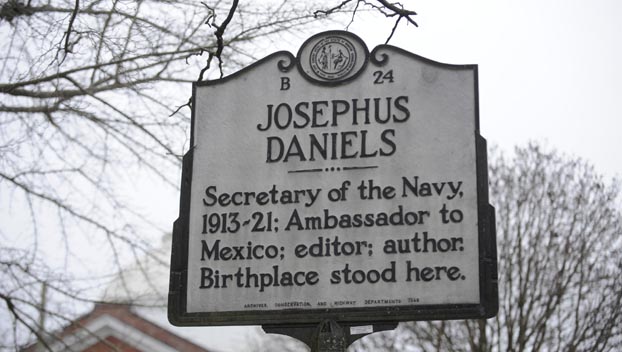 But there is more to his life story: Daniels was a white supremacist who used his power and influence as a newspaper editor to publish and promote his racist views.

“He successfully sought to influence legislators and legislation in Raleigh (as editor of the News and Observer) through editorials and cartoons that portrayed African Americans’ causes and fusion politics as threatening and inferior,” an essay published on the North Carolina Highway Historical Marker Program website reads. “Beyond just words, he played a fundamental role in the 1898 Wilmington Coup, when he helped other Democratic Party leaders in developing a plan, recruiting supporters, and spreading propaganda.”

Daniels played a major role in inciting that coup, also known as the Wilmington insurrection of 1898. An armed mob of white men, which initially included about 500 people and grew to about 2,000, marched through Wilmington and burned the office of the Daily Record, a black-owned newspaper, as well as several other black-owned businesses. Members of the mob intimidated and killed several black men. The riot ultimately led to the overthrow of the Wilmington city government.

Those details about Daniels’ life led Washington attorney Herman Gaskins to submit a request for the Historical Marker Program Advisory Committee to consider modifying or removing the marker.

“It is unquestioned that Josephus Daniels used the News and Observer to incite fear of blacks among whites and to carry the message of ‘white rule,’” Gaskins wrote in a letter to the advisory committee. “He published numerous articles falsely alleging black men were raping white women. He was the primary cause of the Wilmington insurrection of 1898.

“… At minimum, the marker should be modified to show his role in the events of great historical significance in this State. The current marker paints a picture of him that is grossly distorted.”

The Highway Historical Marker Program’s operations have been suspended since late 2019 because of budget and maintenance issues. Ansley Wegner, the program’s administrator, said that the advisory committee can technically still hold meetings, but the program doesn’t have the funding necessary for marker modifications at this point. Marker removals are possible, she said.

But before a meeting is considered, the program is waiting for legal guidance on how to address the requests. Wegner says that per state statutes, markers can only be modified or removed if they contain incorrect information or are installed in an incorrect location.

The News and Observer reported that Daniels’ family removed a statue of him from Raleigh’s Nash Square in June 2020.