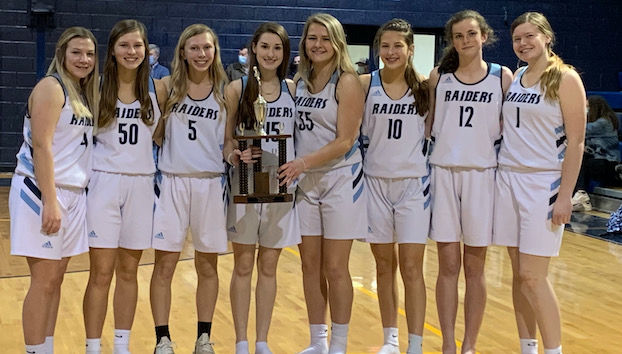 The Pungo Christian Academy girls basketball team earned the top seed in the East and could play on their home floor until the North Carolina Independent Schools Athletic Association 1A state championship game if they keep winning.

The Lady Raiders rolled over Northeast Academy, 60-47 to earn their second Tar Heel Independent Conference title in three years and raise their record to 12-1.

PCA is ranked second in the MaxPreps 1A state poll and drew a bye into the second round of the state tournament. They will face conference foe Lawrence Academy (2-9) Thursday night. Pungo prevailed 45-14 in the regular season meeting.

The Lady Raiders have outscored their opponents, 47-25 and coach Melanie Eddleman said that’s been the reason for their success.

“They’ve communicated so much better with each other on defense this year,” she explained. “We usually play a 1-3-1 with Riley Cutler at the top and use our press occasionally. We’ve rebounded very well, so I’m excited to see how we do in the state tournament. Playing at home is huge and the girls are really excited about that.”

Ricks is the Lady Raiders leading scorer at 12.2 points per game and also grabs 8.9 rebounds per contest. Stoop is second in scoring at 10.3 and leads the team with 9.2 rebounds per game.

The Pungo boys (6-7) faced conference rival Terra Ceia (7-7) in the first round of the state tournament Tuesday at home. The game had not ended when the Daily News went to press. The teams were meeting for the fifth time this season, with the Raiders holding a 3-1 series edge. The winner advances to play at second-seeded Greenfield of Wilson in the second round Thursday.

“It’s odd playing your rival five times in a season, but this has been an odd year,” Raiders coach Logan Van Staalduinen said. “We’ve had 10 games canceled because of COVID-19 and I’ve had to replace five others. We’ve played more in the last two weeks then we did the previous two months. I’m proud of our guys for competing as well as they have under very difficult circumstances.”

Lyons and junior Wilson Sawyer on the all-conference team.