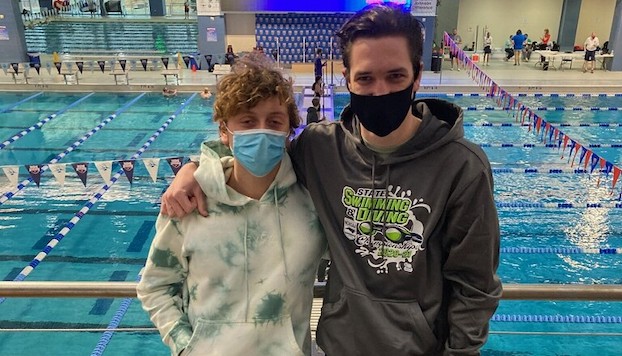 Senior Tristan Pake wrapped up the last of his four straight state swim meets, while sophomore John Hinchey was competing in his first, held Friday at the Triangle Aquatic Center in Cary.

Pake placed ninth in the 200 Individual Medley, which combines the breast, back, butterfly and freestyle strokes into one event. He was 12th in that event as a junior.

“I was a little behind my seed time by about a second and a half, so I could have placed higher, but I swam my best. It’s amazing how close the times are at the state meet,” Pake said.

The letdown came in the 100 Butterfly, which was his last race as a high school swimmer. A slight twitch on the starting block led to a disqualification after he was seeded fifth in the event.

“It’s not the way I wanted to end my high school career, but I’ll get past it,” Pake said. “My nerves got to me a little on the block because I wanted to start strong. I’m proud to have competed at state all four years and I’m happy with what I accomplished.”

Hinchey qualified 12th for the 100 Breaststroke and that’s where he finished, just one quarter of a second behind his time at the regional meet.

“I had a great time and thought I swam pretty well, but I wish Tristan could have finished like he wanted to,” Hinchey said of his good friend. “We got there around noon and I didn’t swim until 5:30, so it was a long time to wait around. I have a better idea of what it takes to place high for next year, so it gives me motivation to come back.