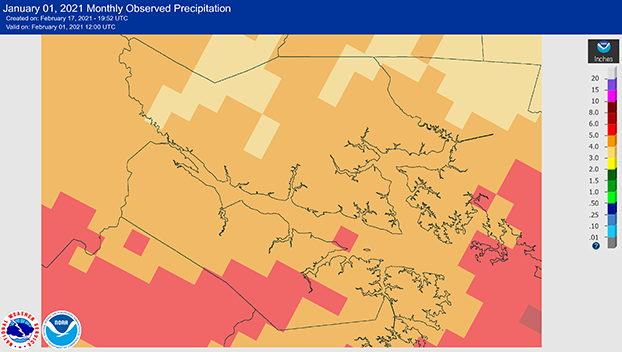 RAIN TOTALS: Rainfall totals for the month of January exceeded five inches in some areas of the county. This is causing headaches for local farmers trying to ensure a good crop when harvest comes. (Graphic from the National Weather Service)

“The crop that it’s affecting currently is wheat. We’ve got wheat in the ground, and we don’t grow a lot of wheat in our area anymore but there are some farmers that have some wheat planted,” said Rod Gurganus, director of the Beaufort County Extension.

According to the National Weather Service, Beaufort County received 5.69 inches of rain compared to the average 4.08 inches for the month of January. This 39.5% increase in rainfall has made soil more saturated and the lack of sun makes evaporation less likely to occur.

“When it’s wet like it is, there’s two things going on. One, they really need to be making some nitrogen applications. The wheat needs nitrogen at this time of year as we get into late February and early March,” Gurganus said. “If we can get dried out, it’s probably not too late to get it out but it’s not ideal either.”

“The other factor we’re seeing on wheat right now is it’s turning purple. You’ll see a purple cast to it and that is an indicator that the plant is not picking up the phosphorus it needs,” Gurganus said. “That’s because the roots are sitting in waterlogged soils and when it’s waterlogged, it stresses the plant and the roots aren’t growing. When roots aren’t growing, they’re not intercepting phosphorus in the soil and absorbing it.”

With more favorable conditions forecasted over the next week, there is a good chance that the soil can become more balanced. However, if precipitation continues to fall, the production of certain crops can be negatively affected and cause Beaufort County farmers to lose money and produce.

Crops like corn and soybeans are very important to Beaufort County and the state. In 2019, the county ranked 1 in the state for both crops, with 5.4 million bushels of corn and 2.5 million bushels of soybeans. Preparations for these crops usually start now with planned planting in early April but this weather makes it difficult to perform any field maintenance.

“There’s a lot of work that goes on this time of year revolving around what we call land shaping. Our land is so flat that we want to put a little bit of a crown in the field,” Gurganus said. “Between the ditches, we want to have a little bit of an elevated surface that will taper down ever so slightly towards the ditch to help drain surface water. This is an excellent time of the year to do that work. We’re not able to do that right now, it’s just too wet.”