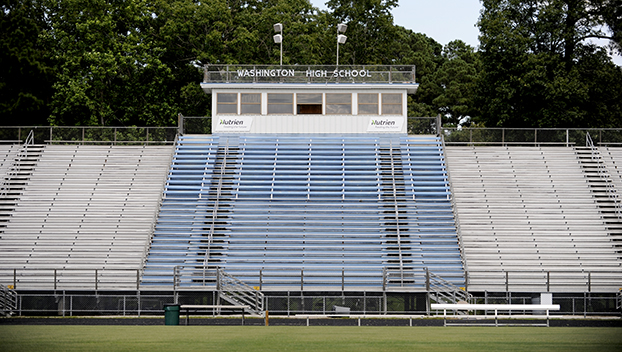 Three state senators from Union, Iredell and Robeson counties filed a bill in the North Carolina legislature that would raise the maximum number of fans allowed into outdoor venues from 100 to 40% of approved occupancy under the fire code.

Washington High School Athletic Director Lane Raper said Wagner Stadium seats around 4,000, so 1,600 would be the most fans allowed in if the bill passes.

With the COIVD-19 delayed high school football season scheduled to start on Feb. 26, there has been a state-wide outcry from parents and fans wanting the limit to be raised.

Under Governor Roy Cooper’s current executive order that is set to expire Feb. 28, outdoor gatherings in venues of less than 10,000 seats are limited to 100 people. No high school football stadium in the state seats more than that. Collegiate and professional venues were limited to seven percent of capacity.

A state-wide petition asking Cooper to revisit the issue and revise the number has almost 40,000 signatures.

Reported COVID-19 related positive cases and hospitalizations are at their lowest point since Thanksgiving in North Carolina and football fans are hopeful the limit will be raised.

North Carolina High School Athletic Association Commissioner Que Tucker said earlier this week that Cooper and Department of Health and Human Services Director Dr. Mandy Cohen have asked her to provide input as the time draws closer for the order to expire.

Local school districts or schools themselves could post stricter limits if they wanted to under the bill, which would need to pass multiple committees in the House and Senate, then gain passage in both before being sent to Cooper to sign or veto.