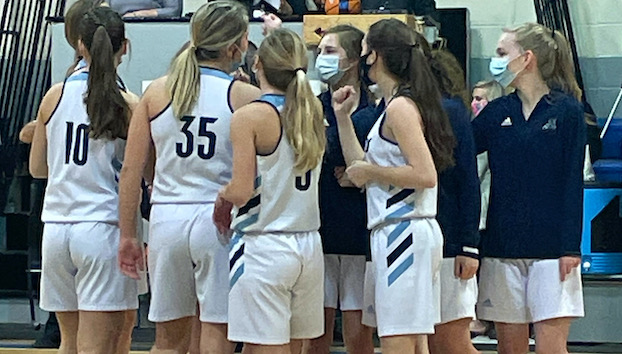 The Pungo Christian Academy girls routed Lawrence Academy, 45-16, Thursday night at home to advance to the third round of the North Carolina Independent Schools 1A state playoffs.

Most teams would at least wait until after school the next day to practice, but not the Lady Raiders. They were back on Hank Stoop court at 7 a.m. ready to go. However, it’s not like it might seem.

“We had Thursday and Friday off for winter break, but some of the girls are dual enrolled at Beaufort Community College,” head coach Melanie Eddleman explained. “We wanted to get practice out of the way so they could go to class while the others could have the rest of the day free. We worked on our press, breaking the press and shot some free throws. It was good for a sleepy, early morning practice.”

After easily dispatching their same conference opponent Thursday, top-seeded PCA will host another league rival, Northeast Academy in Saturday’s third round. The Lady Raiders (13-1) are ranked second in the state 1A MaxPreps poll and beat Northeast three times during the regular season, including a 60-47 conference tournament championship-clinching victory last week.

“Their coach (Joella Brown) has been there forever and knows what she’s doing,” PCA coach Melanie Eddleman said. “We have to be ready for anything. Last time, they tried to speed the game up, so we would turn the ball over. The time before that, they played slower. Our girls are well-prepared, so we hope to advance.”

Pungo jumped out to an 11-2 lead over Lawrence Thursday, extended the advantage to 26-9 at the half and Eddleman let her reserves play most of the second.

“It was good to get everybody some extended playing time,” Eddleman said, as eight of the 10 Lady Raiders scored. “We communicated well on defense, ran our fast break well and got to the free throw line a lot.”

As the top seed in the East, PCA drew a first round bye and has homecourt advantage until the state championship game. Seniors Cutler, Ricks and Williams are making their fourth trip to the playoffs, hoping to advance to the Final Four for the first time.

“They have led us well and want it worse than I do, which is a very good thing,” Eddleman said. “This group made it to the volleyball Final Four and they want to take it at least another step in basketball.”

The PCA boys season is over after a 79-33 loss at Wilson Greenfield in the second round Thursday. Senior Miller Lee led the Raiders (7-8) with 15 points.