Town installs two bicycle racks with support from the state 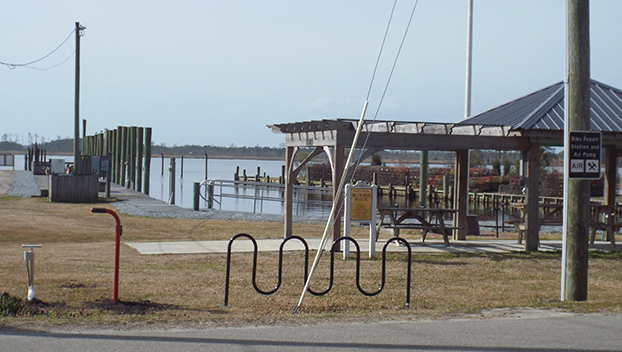 BY THE DOCKS: One of the bicycle racks Belhaven received through the state has been installed near the town docks. This rack also features the 'fixation station', where minor repairs can be done in emergencies. (Photo submitted by Yvonne Deruiz)

BELHAVEN – The town of Belhaven has received and installed two bicycle racks and a repair station through a grant provided by the state.

“We were awarded two bicycle racks and something called a fixation station. What that means is you can repair a flat or you can inflate a flat tire, so it’s a little repair station,” said Yvonne Deruiz, the Small Town Main Street Program Manager.

These bicycle racks are metal and estimated to hold eight to nine bicycles when fully loaded.

“The town has installed them. One is near the municipal building and then the other one is down at the pavilion at Wynne’s Gut at the town docks,” Deruiz said. “We do have boats that come in through the ICW and a lot of them carry bicycles on their boats and that’s how they get around when they dock.”

The bicycle racks were awarded to Belhaven through the North Carolina Division of Public Health under the Department of Health and Human Services. The Small Town Main Street program was notified about receiving the bicycle racks at the end of November and picked the two racks up in Raleigh during the month of December after informing the Board of Aldermen at their monthly meeting.

It’s to encourage healthy living, exercise, getting out there and doing your thing,” Deruiz said. “We have quite a few low income people that do ride bicycles around town and that’s one of the reasons we got this award.”

The bicycle racks and fixation station have been installed by the town and are ready for public use.