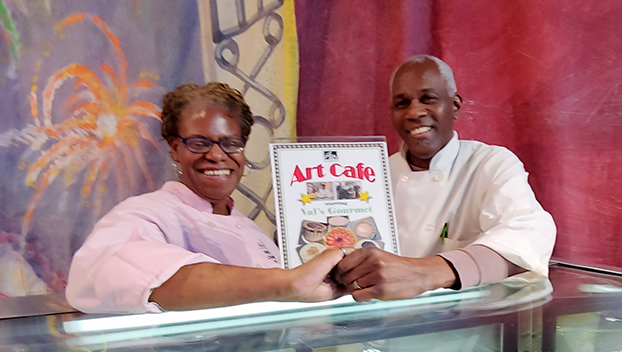 Val and Art Jackson say they are counting their blessings and working hard to satisfy the sweet and savory appetites of residents and visitors of Beaufort County. (Karen Thiel)

Four years, three parking lots and three farmers markets ago, Val and Art Jackson arrived from that bigger, busier Washington up north. Looking for a slower, more peaceful life, they never expected to be giving back to Washingtonians by sharing the tasty products of their combined love of cooking. They’ve done that through rain, shine, indoors, outdoors, straight through the COVID-19 pandemic and, now, as the Turnage Theatre’s newest addition.

“We met at a restaurant,” Art said of his relationship with Val. “We were both too busy to get married,” she joked of their 16 year courtship. The couple discovered Washington’s waterfront farmers’ market in 2016. Shortly after, they were offering not-strictly-southern desserts that were often the fruit of their imaginations. Locals and tourists have enjoyed their creations ever since, following them from town to Greenville and back. As popularity grew, so did their need for an indoor space.

They eventually got a spot at Harbor District Market, where their business became one of three anchor stores. When the pandemic forced the market’s closure, customers offered them several parking lots, including one behind Carolina Janitorial and another at the Family Dollar site on Market Street. “When it rained and stormed almost all last spring, several customers would hang onto the corners of our tent while we sold cakes. We’ve had support from so many people” Art said.

They eventually met Debra Torrence, executive director of the Turnage Theatre, and their world opened up even more. “The partnership has been just terrific in many ways,” Torrence said of the Jacksons. “People are drawn to get a savory or sweet snack and then stay to peruse and shop artwork in the Art Cafe and our Arts of the Pamlico gift shop. New patrons are learning about the theater’s history with a snack and beverage in hand…and if the timing works, may even get a tour from Art!”

“That carrot cake was handed down from Val’s grandmother,” Art bragged, just before Val added that they create everything “from scratch. I was in the kitchen with my mom at eight years old. I make everything fresh. Nothing artificial. My mom would come out of her grave if I used anything from a box!” They also sell honey, chocolate, salsa, Bertie County peanuts and more, all homemade by area residents.

Also genuine is their friendship with Chocowinity resident Kathy Schmit, who has helped them since 2019. “I made cakes with them and did some of the paperwork. We’ve had lots of fun baking at their house. When I got arthritis and couldn’t bake any more, Val said I could just work at the shop.” Val called Kathy her “saving grace. I’ve adopted her as my sister.” Kathy agreed: “We are sisters. I just love them and I’m really happy about where they’re at now.”