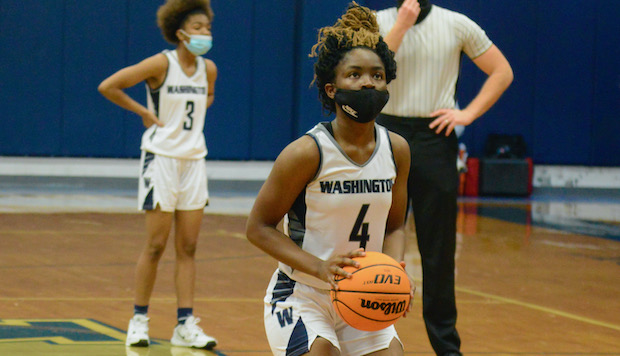 Freshmen Triniti Burke (4) and Katlin White (3) are among nine returning players for the Pam Pack next season. (Steve Barnes|Daily News)

The Washington High School girls basketball team battled through quarantines, cancelled games and other COVID-19 related obstacles to win three of their last four games after an 0-4 start.

Veteran coach Neal Carr took over a struggling program and guided a young group with a steady hand through the early pitfalls.

“I knew it was going to take time for us to get on the same page because they were getting to know me and vice versa,” Carr said. “The COVID disruptions to practice and the missed games put us behind, but the girls did a great job of staying positive and staying together. They connected to each other and to me as the season went on.”

The Pam Pack beat West Craven twice and South Lenoir down the stretch to end on an up note.

“I feel like if we could have played the games that were cancelled, we had a really good shot at finishing above .500,” Carr said. “The girls wanted to play more, but they learned to adjust.”

Three seniors graduate, which means nine of the 12 players return.

“Marchina Warren, one of our juniors, told me when I started that they (the team) were used to being laughed at,” Carr said. “She told me at the end that nobody was laughing now, and she was looking forward to next year. If nothing else, we changed that mentality this season.”

The season continued for three area teams with the first round of the state playoffs Tuesday night, while a fourth was sidelined.

The Washington boys (8-2) are the third seed in the East bracket and hosted #14 Wallace-Rose Hill. The Pack Pam will be home Thursday with a win.

Meanwhile, the top-seeded Pungo Christian Academy Lady Raiders hosted number two Lee Christian with a trip to the NCISAA 1A state championship game on the line. Go to thewashingtondailynewws.com for scores and details on all the games.

The Southside boys were supposed to travel to top-seeded Granville Central, but had to stay home because of COVID-19 contact tracing issues.

“It happened during our game at Tarboro on Feb. 9 when they put in a player who our guys thought was sick,” Seahawks coach Davelle Whitney said. “Sure enough, we ended up in quarantine over it, but we thought the period would be up before the state tournament. We have taken every precaution possible and it’s a shame other schools didn’t. We feel like we lost twice that night-the game and our chance to go to the state tournament. To say our kids are disappointed might be the understatement of the year.”

It was the first time since 2015 that the Seahawks qualified for the playoffs and they’ve gone from last place in the conference three years ago to tied for second this year.

“I am proud of the progress we’ve made, and the tournament game would have been a great way to end a difficult year,” the second-year head coach said. “We’ll bounce back, but it’s a sick feeling right now.”