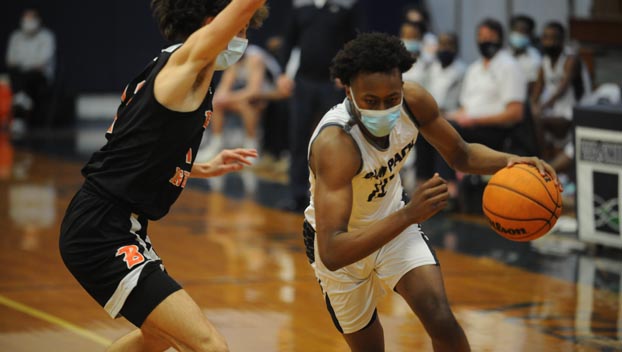 WHS senior Jamauri Bryant drives to the basketball in the first round win over Wallace-Rose Hill. (Brandon Tester| Daily News

The 15ht seeded Southside girls pulled off the upset of the evening with a 60-58 victory at second-seeded Falls Lake Academy near Raleigh. The Seahawks (7-3) made the tournament as a wild card but knocked off a previously undefeated conference champion on their home floor. Sophomore Ka’nyah O’Neal led the way with 26 points, while senior Laquisha Woolard added 20. Southside overcame a three point deficit with a 21 point fourth quarter for the win.

“I knew we would have a great chance to win if we could hang in there until the fourth quarter” coach Milton Ruffin said. “Our speed and fast pace wore them down and we played great defense against a good shooting team. Our girls fought hard and it was a great win.” The Seahawks play at the Gates County Thursday.

The third seeded Washington High School Pam Pack broke open a close game with a 13-0 run to open the second quarter on the way to a 79-61 home victory over Wallace-Rose Hill to open the 2A tournament. Senior twins Jamauri and Jeremee Bryant keyed the run, combining for 16 of the Pac’s 22 points the in quarter.

“I’ve coached brothers, but never twins,” coach David Allewalt said. “Their connection to each other is uncanny and they know where each other is going to be. Both of them rebounded well and got out in transition. We put our foot on the gas in the second quarter and we’re fun to watch when we are rolling like that.”

Senior Omarion Blount led the scoring with 25 points. Jamauri Bryant finished with 19, while Jeremee had 17.

WHS (9-2) hosts sixth seeded James Kenan of Warsaw in Thursday’s second round. With a win, the Pam Pack would host the third round Saturday because second-seeded Heide Trask of Rocky Point in Pender County lost to #15 Northeastern of Elizabeth City Tuesday night.