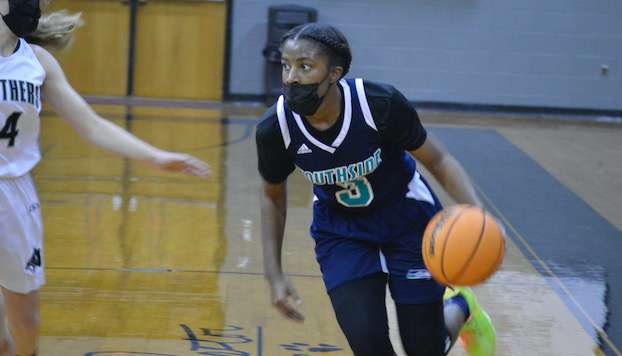 Sophomore Ka’nyah O’Neal averges a double-double as she leads the Seahawks to the third round of the 1A state tournament. (Steve Barnes| Daily News)

Southside, 7-3, made the 1A girls state tournament field as a wildcard after a third place finish in the Coastal Plains conference.

Their season was delayed for two weeks at the beginning because of COVID-19 contact tracing and was disrupted later when an opponent had positive tests.

The team battled through it and travels to Princeton to face the 14-0 Bulldog in the third round Saturday night.

Sophomore Ka’nyah O’Neal and senior Laquisha Woodard have combined for 90 of the Seahawks 108 points in the tournament and O’Neal is averaging 26 points and 15 rebounds a game from her guard spot.

“We take the wins and keep on going,” coach Milton Ruffin said. “We’ve been through a lot this year with quarantines and such, but I knew we could be good if we could get some consistency with our schedule. It’s been fun so far”

With a win and a Northside victory, over East Carteret, the Seahawks would face their county rival for the right to advance to the state championship game.