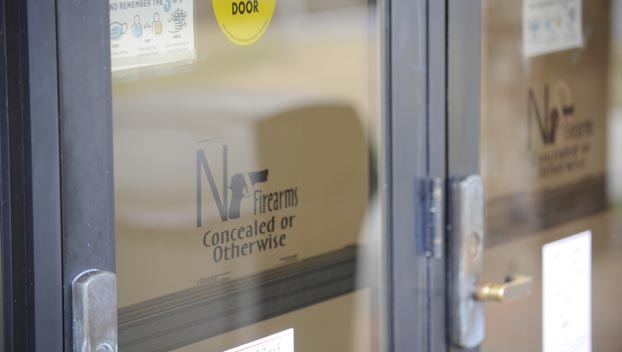 The Beaufort County Commissioners will consider a resolution Monday that would officially state that the board is no longer exercising its authority under N.C. general statutes to prohibit the concealed carrying of a handgun in or on county property.

During February’s meeting, the commissioners voted 5-2 in favor of a motion to direct County Manager Brian Alligood to craft the resolution.

That happened after the commissioners in January approved Stan Deatherage’s resolution to allow duly licensed county employees to carry concealed handguns in many county buildings. After consulting with the county’s legal team Alligood said that, per state statutes, the commissioners couldn’t categorize which licensed individuals can or cannot carry concealed guns in county buildings.

The resolution to be considered Monday comes with personnel policy additions and changes that address county employees’ ability to carry concealed handguns.

The proposed resolution states that the Board of Commissioners “no longer prohibits the possession of concealed handguns in Beaufort County buildings by individuals in possession of a valid concealed handgun permit, not withstanding existing North Carolina General Statutes related to regulation of the same.”

The proposed personnel policy changes include information about which individuals would be eligible to carry concealed handguns, as well as policies pertaining to prohibited areas, concealed handgun storage, and protocols for handling threatening or violent behavior in the workplace.

A proposed addition to the personnel policy states that any county employee who chooses to carry a concealed handgun at work would need to notify their supervisor and provide them with a copy of their concealed handgun permit. The supervisor would need to notify the county manager in writing of the notification, and provide the county manager with a copy of the permit.

Monday’s meeting will begin at 5:30 p.m. at the Beaufort County Financial Services Building, which is located at 136 W. Second Street. In-person seating is limited. A recording of each meeting plays on local cable (channel 9) every day at 6 a.m. and 1:00 p.m., and on the Riverstreet access channel on Wednesdays at 1 p.m. and Thursdays and Saturdays at 7 p.m.