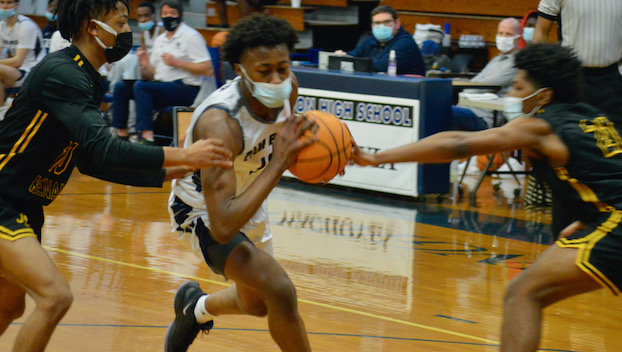 It takes five victories to cut down the nets as a state champion in the North Carolina High School Athletic Association tournament. The Washington boys have three more to go.

The Pam Pack, 10-2, is on a path that would keep them at home until the 2A championship game and need to knock off Northeastern (9-3) of Elizabeth City Saturday at 6:30 to advance.

Thanks to the newly loosened crowd restrictions, there will be 125 tickets available to the general public according to WHS Athletic Director Lane Raper.

“We’ll open the gate at 5:30, an hour before tip-off,” Raper said. “Admission is $7, and the gate will be on the student parking lot side of the gym.”

“Our entire team has played great so far, and we certainly hope that continues,” second-year coach David Allewalt said. “Our defense has been aggressive, and we’ve rebounded well which has started our transition. We play really well at home and we want to stay as long as we can.”

With a win, the Pack is looking at a potential home matchup with powerhouse Farmville Central, who is 12-0 after making it to the title game last year before COVID-19 cancelled it. The Jaguars are on a 19-game winning streak that includes a second round win over Washington last year. They play at Reidsville Saturday.