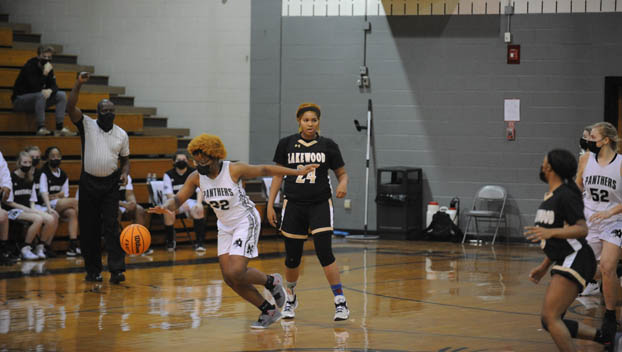 The Northside girls will play for the right to advance to the 1A state championship after a come-from-behind 51-45 victory against East Carteret Saturday night in Beaufort. They will play at Princeton Tuesday night.

The Panthers (11-4) trailed 34-22 early in the fourth quarter but rallied for 29 points in eight minutes to take the win.

The home team was whistled for 35 fouls and finished the game with only two players on the floor.

Junior Paige Sawyer started the rally with nine straight fourth-quarter points on five free throws and a pair of buckets.

Freshman Mariah Jones took it from there, reeling off seven straight points on a free throw and back-to-back 3-pointers, to pull Northside to within one.

Freshman Jean Grace DeHoog hit a pair of foul shots for a 42-41 lead, then Jones hit a 3-pointer, Sawyer made a basket and one, then Jones nailed two free throws for the win.

Jones finished with 29 points that included eight 3-pointers, while Sawyer had 14. The two combined for all the Panthers’ field goals on the night.

“Mariah shot the lights out from three and Jean Grace’s free throws to put us ahead were huge,” Panthers coach Michelle Leathers said. “Paige Sawyer hit some big shots in the fourth quarter as well. We hung in there and kept battling and it payed off.”

Northside could have met county rival Southside in the next round, but the Seahawks fell, 67-52 at Princeton as the Bulldogs stayed undefeated at 15-0. Sophomore Ka’nyah O’Neal finished with 24 points for Southside, senior Laquisha Woodard scored 15 and classmate Sarah Petty added 11.

“Princeton is a very good team and shot very well,” Southside coach Milton Ruffin said. “We just couldn’t match point for point with them, but I’m very proud that we fought to the end.”

The Washington boys basketball team fell behind early to Northeastern of Elizabeth City and fell, 79-67, before an almost-full house at Dave Smith Gym.

Jack Kirkman’s three pointer at the halftime buzzer cut the deficit to 30-27, but the Eagles (10-3) used their bulk inside to keep the Pam Pack (10-3) out of the lane and off the glass. Their decided rebounding advantage negated the Pack’s fast-break offense, and Washington’s 3-pointers and free throws wouldn’t go in.

“We picked the wrong night to go cold,” WHS coach David Allewalt said. “Northeastern is a very good team and they controlled the tempo all night and we had an off night shooting the ball. They had some big bodies inside, which made the three (point shot) more important. We just couldn’t make them.”