Northside girls need road win to play for 1A title 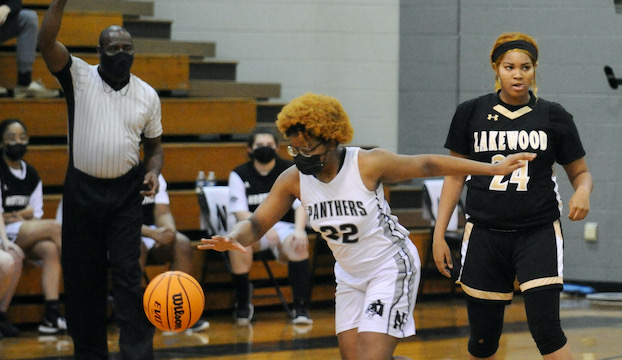 Northside freshman Mariah Jones made eight three pointers in the Panthers third round win at East Carteret Saturday. She's seen here in a second round game vs. Lakewood.

After Saturday night’s epic fourth quarter comeback, the Northside girls face another tall task on the way to the 1A title game. The 15-0 Princeton Bulldogs will await their arrival for a 6 p.m. tipoff Tuesday night.

The Panthers (11-4) wiped out a 12 point deficit with under eight minutes left for a 51-47 victory over East Carteret in Beaufort, which put them in the East regional final for the first time since 1996.

The Panthers won that one, then lost in the 2A championship game, 44-43, to Mitchell High School from the mountains.

This post-season, Northside rolled over West Columbus, 74-19 on the road in the first round, routed Lakewood, 83-55, at home before their third round mini-miracle comeback.

Princeton’s league rival Lakewood is the only common opponent. The Bulldogs beat them three times by 16, 10 and 15 points, while the Panthers prevailed by 28 in the second round blowout.

“We’ve never played them and don’t know anything about them this year other than their record,” coach Michelle Leathers said. “We are very excited and grateful for the chance to keep playing. This is a humble group, and they get along very well. They don’t care who scores as long as somebody does. I tell them teamwork makes the dream work and they’ve listened so far.”

Freshman Mariah Jones leads the team in scoring at 29 points a game in the tournament, while senior Katie Godley (17) and junior Paige Sawyer (16) also average in double figures.