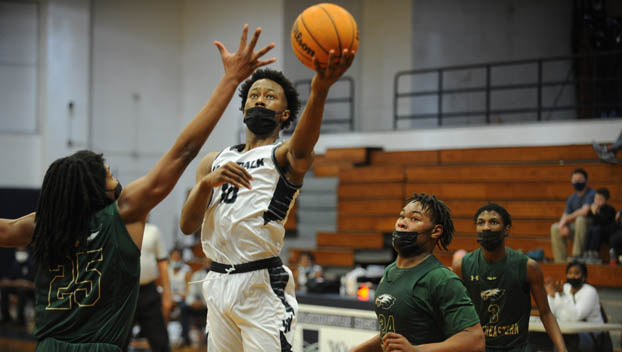 The Pam Pack (10-3) fell at home, 79-67, to Northeastern of Elizabeth City to end their deepest run in the tournament since 1985, when they also made it to the third round.

WHS had three starters in foul trouble in the first half and had trouble holding the bulkier Eagles off down low.

Northeastern controlled the rebounds and let them dictate a slower pace than the Pam Pack wanted.

Compounding matters, the Pack went 7-19 from the free throw line and missed the majority of their three-point attempts.

“We picked the wrong night to go cold,” second-year coach David Allewalt said. “They held us off the boards, so we couldn’t run like we wanted to, and it was tough to get the ball inside against them. It would have been a different story if our threes were dropping, but they weren’t and that’s basketball.”

10 of the 12 varsity players were seniors and Allewalt said they had a great run.

“The community should be proud of these guys because I certainly am,” he said. “We made it to the second round last year and the third this time, with a conference title. These guys have been a pleasure to coach and have laid the foundation for those who follow. Our JV was undefeated (11-0), so the future is bright for Pam Pack basketball.”

The situation is similar for the Southside girls, who battled through a COVID-19 quarantine that delayed their season two weeks at the start to earn a wild card spot in the 1A tournament.

After knocking off Falls Lake Academy and Gates County on the road, the season ended with a 67-50 loss at undefeated Princeton Saturday night.

O’Neal averaged 25 points and 15 rebounds a game for the season to lead area scorers and rebounders.

“She improved each game and so did everybody else,” coach Milton Ruffin said. “It was emotional saying goodbye to the seniors because they played hard and gave everything they had. I’ve truly enjoyed coaching the six of them and they’ve met every challenge with grace and their best effort.”