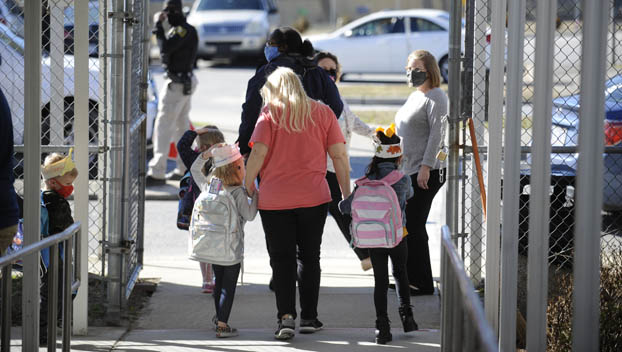 Five more schools in the Beaufort County Schools system that are operating under Plan B — Washington High School, Northside High, Beaufort County Early College High School, Southside High and the Ed Tech Center — will offer in-person learning four days a week beginning March 22. Northeastern Elementary and S.W. Snowden Elementary, which are already offering classes four days a week for grades K-5 under Plan A, will now do the same for grades 6-8 under Plan B.

Currently, the state is allowing grades K-5 to operate under Plan A (in-person learning with minimal social distancing requirements). Grades 6-12 can operate under Plan B, which allows schools to reopen under a reduced capacity, but districts can’t use Plan A for those grade levels.

The Board of Education approved the changes for those seven schools Tuesday. The changes weren’t recommended or implemented at other schools in the district because some of those schools are already in Plan A, while other schools wouldn’t be able to accommodate the state’s social distancing mandate based on how many students they project will return to in-person learning when the fourth quarter of the school year begins.

Wednesdays will continue to be remote learning days across all grade levels.

Superintendent Matthew Cheeseman said the school board’s collective desire to bring students back to the classroom prompted the changes.

“The hard part is you would essentially say yes to some but not to all,” Cheeseman said. “The challenge is the larger populations in the middle schools.”

Cheeseman said he recognized that the changes would result in “a little bit of heartache” for the principals of the three schools that could not accommodate social distancing if they offered in-person classes four days a week.

The changes approved Tuesday won’t affect the school board’s recently-approved attendance policy modifications, which essentially state that students designated for in-person learning will need to attend those in-person classes whenever they’re offered, and they’ll be marked absent if they don’t show up at all or log in virtually. Similarly, students whose families have chosen to have their students learn remotely will be marked absent if they aren’t logged in and participating at the required times, and they will not be allowed to show up for in-person classes. Those attendance policy changes are set to take effect March 15.

“Chocowinity Middle won’t be going four days,” board member Terry Williams said to Cheeseman. “But the school that they feed, Southside, would be. And you know there’s going to have to be some families that that might impact, because of having kids both ways. And they can opt out — I get they can opt out and stay completely remote. You don’t think that would be an issue?”

“I do, 100%,” Cheeseman responded. “…My thought was, how can we get kids back? And the answer to that is I will not have a solution for every family, and families will have to make choices based off of what’s in the best interests of their children. And, to be really honest with you, as I sit here, I’m also a parent who’s making a decision to say no to my only child, because she’s at P.S. Jones.”