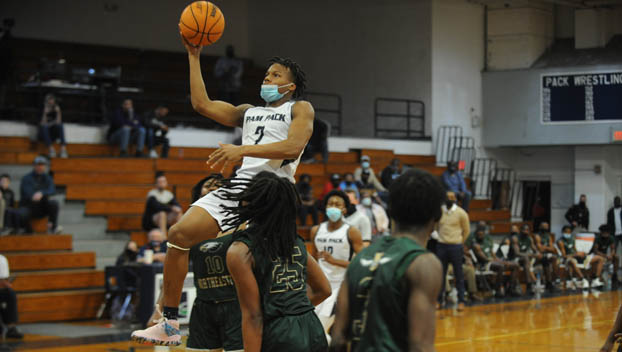 Junior Terry Moore returns for his senior season after scoring in double figures for the Pack in 2021. (Brandon Tester|Daily News)

Northeastern High School of Elizabeth City ended the Washington boys run in the 2A state basketball tournament with a 79-67 victory on the Pam Pack’s home floor Saturday night.

WHS’ normally accurate three-point shooting was not on target and they couldn’t drive the middle to spread the floor against the bulky Eagles inside players.

Elizabeth City’s size and heft also kept the Pack (10-3) from rebounding as usual, so they couldn’t start their fast break offense.

“We ran up against a very good team on a very cold shooting night,” second-year coach David Allewalt said. “It’s not good for us when our three-pointers don’t drop, and we missed most (7-19) of our free throws when we did drive to the basketball.  Tonight just wasn’t our night.”

Early foul trouble hampered the Pack as well, with three starters on the bench at one point in the first half.

Senior Jack Kirkman’s three-pointer just as the first half ended pulled WHS to within three, but that was as close as they would come. Kirkman is one of 10 seniors who played his final game in a Washington uniform, but the future is bright according to Allewalt.

“These guys were part of two straight tournament teams and it’s the first time since 1985 that the program has been to the third round,” he explained. “They were a pleasure to coach and laid a great foundation. Our JV was undefeated (11-0), so next year looks good as well.”

Junior point guard Terry Moore is the top returnee and averaged in double figures this year along with senior twins Jamauri and Jeremee Bryant and Omarion Blount.