Pam Pack returns key players on both sides of the ball 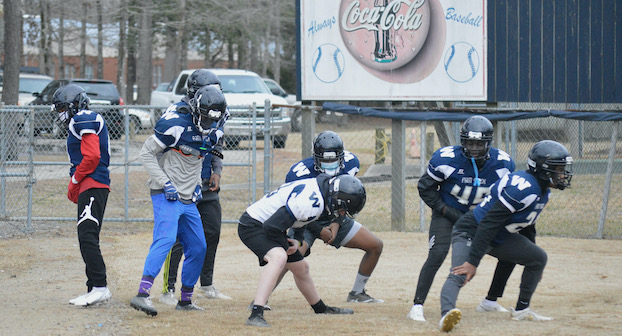 After another week of waiting because of COVID-19 issues in an opposing program, the Washington High School football season will start Friday at North Lenoir. The Pack should be an entertaining team to watch when the pads finally start to pop.

The scheduled opening opponent, Kinston High School, was in quarantine, so the Hawks will provide the first opposition for the seven game season.

The game will be made up March 23, which is a Tuesday, at 6:30. It’s the latest twist in an already quirky schedule that gives the Pack four straight home games beginning with D.H. Conley on March 19.

There have been plenty of changes since the 2019 season ended, but the most notable involve a promotion and a graduation.

Perry Owens stepped into the head coaching role after three years as the offensive coordinator, just in time for his multi-talented quarterback Antwone Godley to graduate and move on to North Carolina Wesleyan.

Junior Hayes Pippin takes over under center and Owens says that gives the Pack a different look.

“He gives us more of the drop back and throw it style than the triple option style,” Owens explained. “We want him to lead us well and make good decisions with the ball. We should be more balanced offensively, because Juan Rosario, Hayden Anderson, Walt Gerard and William Reid can catch it.”

The Pack rushed for over 4,000 yards last season on the way to a 9-4 record and a trip to the 2A playoffs second round. Junior Terry Moore led the way with 1,170 yards and 10 touchdowns, while senior Jaden Hambric rambled for 1,140 and scored nine times. Those two, along with Gerard, will carry the load again.

Senior guards Robert Pollack and Ben Swinson along with sophomore center Myles Jackson lead the way on the offensive line.

The Pack returns nine of 11 starters on offense and defense, including Gerard at linebacker and Moore in the secondary.

“I think Walt will be a 100 tackle guy, which is pretty good for a seven game season,” Owens said. “Terry is our elite athlete in the secondary and our line is solid.”

It’s been an eternity since the players have hit somebody other than a teammate. We are in full game week prep mode and it’s good to have our basketball players (Hambric, Moore, Rosario, Joe’l Gardner, Messiah Ebron) back, although we were hoping they would play for a state title.”

“We’ve refurbished the locker room, power washed the stadium, re-painted the goal posts, re-done the film room and our new uniforms are in,” Owens said. “All the home improvement projects are complete, and the guys are tired of beating up on each other. We are all ready for a piece of somebody else.”